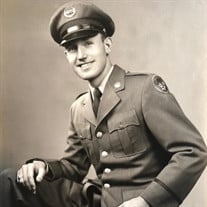 William Enoch Yeager, age 96, died on March 22, 2021 at his home in Haymarket, Virginia while receiving hospice services. He was born on January 1, 1925 in Sandy Cross, NC to John W. Yeager and Enola N. Yeager. He attended public schools in Norfolk, VA before entering the Apprentice School at the Norfolk Naval Shipyard. There he was trained as a shipboard pipefitter so that he could assist in the war effort. In April 1944 he entered active duty in the Army. He was stationed in Normandy, France before seeing battle in Germany as part of the 97th Infantry Division. This division was recognized for firing the last shots of WWII in Europe. He returned stateside before being re-assigned to Japan where he served as part of the U.S. Occupation. He received an honorable discharge in June 1946 as a Staff Sergeant. He later re-enlisted in the Air Force and served for one year. Following a second honorable discharge, he attended and graduated from East Carolina University, receiving a Bachelor’s degree and teachers certificate. William began employment as a Special Agent for the Naval Investigative Service in 1956 and held various positions within that organization until he retired in 1977. He later returned to work as a Special Investigator for the U.S. State Department, a position he held from 1985 until his retirement at age 83. In his retirement years William enjoyed gardening and target shooting with his son Drew and traveling to Connelly Springs, NC with his wife of 69 years Elizabeth and their beloved poodles. He also enjoyed sharing a love of reading mystery novels and visiting historical sites in the Pacific Northwest with his daughter, Lisa. William was an active member of Sudley United Methodist Church for over 25 years, often teaching adult Sunday school. He was active in various Masonic Lodges during this lifetime, last attending the Haymarket Lodge No. 313. William is survived by his wife Elizabeth N. Yeager (Haymarket, VA), son Drew A. Yeager (Haymarket, VA), daughter, Lisa R. Yeager (Bellingham, WA), sister Viva L. Stallings (Hobbsville, NC) and many extended family members who fondly knew William as Uncle Enoch. He will be remembered for his devotion and unwavering love for his family, his kindness to all he met, and his warm smile. He will be forever missed and always in our hearts. A funeral service will be held at Pierce Funeral Home on Monday, March 29, 2021 at 10:30 am, followed by a graveside service at Sudley United Methodist Cemetery

William Enoch Yeager, age 96, died on March 22, 2021 at his home in Haymarket, Virginia while receiving hospice services. He was born on January 1, 1925 in Sandy Cross, NC to John W. Yeager and Enola N. Yeager. He attended public schools in... View Obituary & Service Information

The family of William Enoch Yeager created this Life Tributes page to make it easy to share your memories.

Send flowers to the Yeager family.