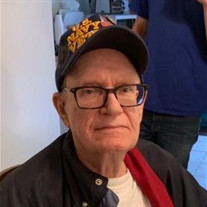 William Charles Liller, 80, of Manassas, Virginia passed away on December 24, 2020. He was born on May 24, 1940, in West Virginia to Lemoine and Ruth (Kirk) Liller. William served from 1961 to 1965 in the U.S. Navy. He was trained as an Aviation Ordnanceman and spent the majority of his time stationed at Naval Air Station, Lakehurst, New Jersey. He spent most of his civilian career as a Computer Systems Analyst with the Inspector General, U.S. Army, Pentagon where he retired in 2004. He has been a member of St. Mark’s United Methodist Church in Manassas since 1969. William is preceeded in death by his parents, and brothers Robert and Richard Liller; He is survived by his wife of 56 years, Marie; Son, Randall W Liller; Daughters, Terena M Van Scoyoc (Benjamin), and Amy C Stern (Neil); Grandchildren, Tiffany Van Scoyoc (Jeremy Branham), Adam Van Scoyoc, Kathryn Van Scoyoc, Joshua Stern, Alexis Liller, and Ethan Stern; Great-grandchildren, Brian Griffey, Paige Branham, Mira Branham, Ali Phillips, Kindall Liller, Lola Stern, Michael Adamo, Jr.; and Sister, Mary Delores Grogg. A memorial service will be held for William on January 15, 2021, at 1:00 PM at Pierce Funeral Home Chapel, 9609 Center Street, Manassas, Virginia 20110. Service will be private due to restrictions of COVID-19. You can watch the recorded live stream at the following link: https://www.youtube.com/watch?v=fxtBCoIHszk&feature=youtu.be

The family of William Charles Liller created this Life Tributes page to make it easy to share your memories.

Send flowers to the Liller family.