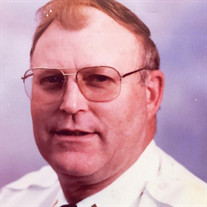 October 06, 1938 – May 03, 2022 William Thomas Hunt 83 of Haymarket, Virginia, passed away on May 03, 2022. Bill was born on October 06, 1938 in Haymarket, Virginia to the late Mary Hunt Chandler and Eppa Hunton Hunt. Bill is survived by his wife of 62 years, Mary Ann Hunt of Haymarket, Virginia, his sister Brenda Smith and husband Jon Spittle of Manassas, Virginia, also surviving is his sister in law, Marion Sirk and husband Danny Sirk of Nokesville, Virginia and brother in law Bill Thayer and wife Jan Thayer of Culpeper, Virginia. He is also survived by his best friend and cousin, retired Army General Thomas Lightner of California. After graduating from Osbourn High School as an outstanding football and baseball player, Bill joined the United States Air Force and served his country as a Military Police Officer in North Africa and other military installations. After receiving an honorable discharge he joined the Warrenton Town Police Department. After leaving the town police Bill was hired by the Prince William County Sheriff’s Department in 1960 where he served until he joined the newly formed Prince William County Police Department as a Sergeant rising to the rank of Lieutenant and retired after serving 36 years in law enforcement. While with the Prince William County Police Department, Bill applied for and was accepted to attend the prestigious F.B.I. National Academy in Quantico, Virginia, where he graduated in 1973. During Bill’s retirement he enjoyed working security for the Paul Mellon Estate in Upperville, Virginia. He was a past member of Fairfax Rod and Gun Club in Manassas, Virginia where he enjoyed shooting Trap, skeet and pistols. Past member of the Gainesville-Haymarket Volunteer Fire Department. In 1968, he was chosen Policeman of The Year by the Manassas Kiwanis Club. Bill was also chosen, “ Outstanding Young Police Officer”, by the Greater Manassas Jaycees for 1971-1972. He was a past member of the Haymarket Town Council. Graduated from the Northern Virginia Police Academy and was selected class President. He attended the Dade County Police Academy in Miami, Florida in 1959. As a Deputy Sheriff, he attended the Central Police Training School in Richmond, Virginia. Bill and Adrian Lemmers were the first two promotions made by Chief George T. Owens, of the newly formed Prince William County Police Department from Sergeant to Lieutenant. The family will receive visitors at Antioch Baptist Church, 16513 Waterfall Road, Haymarket, Virginia 20169 on Monday, May 09 at 11:00am, followed by a service celebrating Bill’s life at 12:00pm, with Rev. Billy Tatum officiating. Burial will take place at Stonewall Memory Gardens located at 12004 Lee Highway, Manassas, Virginia 20109. After the service, friends are invited back to Antioch Baptist Church for refreshments. In lieu of flowers, donations in Bill’s memory may be made to the Middleburg Humane Foundation, P.O. Box 684, Marshall, Virginia 20116.

The family of William Thomas Hunt created this Life Tributes page to make it easy to share your memories.

Send flowers to the Hunt family.