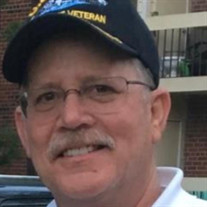 Cahill, William Joseph (Joe) After a long, hard-fought battle with COVID-19 and related complications, Joe of Bristow, Virginia passed away on October 9, 2021 at MedStar Georgetown University Hospital at the age of 66 surrounded by his loving family. Joe was born on April 9, 1955 in Carlisle, Pennsylvania to Lois Stouffer and William Albert Cahill. He enlisted into the United States Navy in January of 1978. He served his country proudly and courageously until his Honorable Discharge and retirement in 1998. Upon enlistment, Joe was a Seaman Apprentice Fire Control Technician and submariner, working his way up to Chief Petty Officer. After retiring, he moved his family to Bristow, Virginia. He attended Strayer University where he received his Bachelor’s Degree, Magna Cum Laude in Computer Information Systems. Joe worked as a Logistician/Software Analyst at EG&G/Amentum and finally retired in April, 2020. In 1991, Joe initially joined the Knights of Columbus in Charleston, South Carolina where he was part of a very special brotherhood. In 1995, Joe was a founding member of the Saint Mary’s council in Pensacola, Florida. As years passed, he received his Fourth Degree on April 1, 2017 through the George Brent Council of All Saints Catholic Church where he held multiple positions as an active member. Joe loved life! He mostly enjoyed spending time with his family, taking photographs of every moment, and cooking. He will be sincerely remembered for his witty jokes, his unfailing work ethic, and his willingness to help any neighbor in need regardless of time. His love of music, specifically The Oldies and Rock n’ Roll, could be heard on his radio at any given time. And let’s not forget his patriotic pride that could always be seen in his Navy Veteran baseball hat he never left the house without. He is survived by his loving wife of 36 years Sandra Cahill, daughter Jennifer Cahill (Fiancé Kellen Walters) of Virginia Beach, Virginia, and son Timothy Cahill of Bristow, Virginia. He is also survived by his step father Paul Lupien of Manchester, New Hampshire, brother John Cahill (sister-in-law Rita) of San Diego, California, step-sister Suzanne Beaudry (husband David) of Manchester, New Hampshire, step-brother Paul Lupien (sister-in-law Susan) of Edgewater, Florida, step-sister Michelle Clapper (brother-in-law Christopher) of Londonberry, New Hampshire, step-brother David Lupien (sister-in-law Beth) of Naples, Florida, step-sister Lisa Milliard (brother-in-law Ron) of Londonberry, New Hampshire, and sister-in-law Linda Lutz (brother-in-law Michael) as well as numerous nieces and nephews. He is predeceased by his parents and his younger brother Robert Cahill. Family and friends are invited to celebrate Joe’s life at Pierce Funeral Home, 9609 Center Street, Manassas, Virginia on October 28, 2021 from 12:00 to 4:00. A memorial service will be held at 10:00 AM on Friday, October 29, 2021 at All Saints Catholic Church, 9300 Stonewall Road, Manassas. Honorary burial services immediately following at Quantico National Cemetery. In lieu of flowers, donations can be made in memory of William Joseph Cahill to KOVAR https:/kovarva.org/donate/. Please designate specifically the Knight of Columbus Council 5332 in the donation form

Cahill, William Joseph (Joe) After a long, hard-fought battle with COVID-19 and related complications, Joe of Bristow, Virginia passed away on October 9, 2021 at MedStar Georgetown University Hospital at the age of 66 surrounded by his loving... View Obituary & Service Information

The family of William Joseph Cahill created this Life Tributes page to make it easy to share your memories.

Send flowers to the Cahill family.