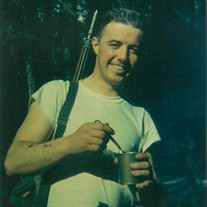 William Thomas Bartlett was born into this world September 9, 1940. He traveled on to be with his Lord and Savior, Jesus Christ and Our Heavenly Father, on May 7, 2021. He was preceded in death by his father Lloyd Bartlett, his mother Doris Duncan, his brother James, his sister Ellie Compton, and his son William T. Bartlett Jr. William joined the Army on May 22, 1962 to protect our country, fellow Americans, family, and friends. During his tour in Vietnam War, he was stationed in Alaska, where he was awarded several awards, such as a marksmanship award and an award for being one of the 1st -50O war game participants as a member of the 23rd Infantry Tomahawks Aggressor Forces in Exercise Timberline. He was honorably discharged as a Private First Class on April 3, 1968. William is survived by his beautiful wife Joan, his brother Pat, sister Edie, his two daughters Tammy and Tina, their spouses, 5 grandchildren, and 10 great-grandchildren, as well as a family too large to mention and far too many friends to list. William “Bill” wore many different hats and monikers, and he was great (if not awesome) at them all. He was a son, a brother, a cousin, a husband, a lover, a father, a grand-father, a great-grand-father, a mentor, a friend, a confidant, a supporter and even an enabler at times, he was also a jokester. But most of all he was a “Brother in Christ” and will be missed for a long, long time. Until we meet again ”Bill”, WE LOVE YOU!!! Relatives and friends may call at Pierce Funeral Home, 9609 Center St. Manassas, VA 20110 on Monday, May 10, 2021 from 6-8 PM, where a funeral service will be held on Tuesday at 10 AM. Reception will follow at the Moose Lodge, 9305 Brentsville Rd. Manassas, VA 20112. The reception will be a potluck to help the family with supplying food and drink to the guests, family, and friends. Interment will be at Quantico National Cemetery at a later date. In lieu of flowers, the family is asking for donations to be made to either a Parkinson’s or a Dementia foundation.

William Thomas Bartlett was born into this world September 9, 1940. He traveled on to be with his Lord and Savior, Jesus Christ and Our Heavenly Father, on May 7, 2021. He was preceded in death by his father Lloyd Bartlett, his mother Doris... View Obituary & Service Information

The family of William Thomas Bartlett Sr. created this Life Tributes page to make it easy to share your memories.

William Thomas Bartlett was born into this world September 9,...

Send flowers to the Bartlett family.