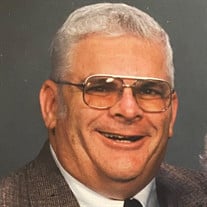 Wayne Ray Moore, 86, of Manassas, Virginia passed away peacefully on Wednesday, January 5th, 2022, with his loving wife by his side. Born on March 8th, 1934, to the late Harris and Evelyn Gray Moore in Portsmouth Virginia. As a young boy his mother married the late Joseph Rhodes, who became Wayne’s stepfather. He grew up in the Norfolk, Portsmouth area. Spending his days going to school and church. After graduating from Maury High School in 1953, Wayne enrolled in Virginia Polytechnic Institute, later known as Virginia Tech. There, he was a Corp Cadet, earning the rank of Lieutenant Colonel and was a group commander. Graduating in 1958 with a Master’s degree in Education, he moved to Bassett, VA to start his first teaching job in Business Education. After 6 years he became the Principal at Sanville Elementary School and then became the Assistant Principal at Bassett High School. In 1964, he transferred to Hargrave Military Academy in Chatham, VA teaching History and in 1968 he came to Prince William County Schools working for both Prince William County and Manassas City School systems. There he was a teacher, a football coach, an assistant Principal and a Budget Specialist and he retired in March 2000 as the Director of Finance and Personnel for the Manassas City Schools after 32 dedicated years. As a licensed pilot, he enjoyed flying on the weekends to observe the ariel views of the Commonwealth of Virginia. Other favorite pastimes were traveling the world with his wife, and he enjoyed watching collegiate and professional football. Surviving is his wife of 30 years, Audrey Hooper Moore. Graveside services will be held on Wednesday, January 12th, 2022, 12:00pm, at Stonewall Memorial Gardens. His wife will receive friends at their home immediately following the service. In lieu of flowers, donations may be made to St. Jude Children’s Research Hospital or Ronald McDonald House.

Wayne Ray Moore, 86, of Manassas, Virginia passed away peacefully on Wednesday, January 5th, 2022, with his loving wife by his side. Born on March 8th, 1934, to the late Harris and Evelyn Gray Moore in Portsmouth Virginia. As a young boy his... View Obituary & Service Information

The family of Wayne Ray Moore created this Life Tributes page to make it easy to share your memories.

Send flowers to the Moore family.