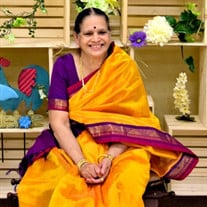 Our beloved Saroja Krishnan passed away on March 21st, 2022, in Chantilly, Virginia, at the age of 83 years. Saroja is survived by her loving children Usha, Asha Shankar, and Jyothi, their spouses and eight fantastic grandchildren and two great grand kids who loved her very dearly. She was born on August 27th, 1938, in Trichur, Kerala. She married Mr. E.S.V. Krishnan in 1960, at the age of 22 years. When asked about her decision to marry Mr. Krishnan, she often joked about how she barely knew him before her wedding day, but took a leap of faith, trusted her destiny, and cherished her married years thereafter. Saroja made the bold move of relocating to Kuwait in 1960 after marriage, and even boarded her first flight at that time! In Kuwait, she lived 50 grand years of her life, where she built a legacy alongside her husband, lovingly brought up four children and earned much deserved respect and love from friends, family, and the whole Indian community in Kuwait. Both Saroja and Krishnan were actively engaged in the Chinmaya mission in Kuwait, being the pioneers for establishing the Chinmaya community there, helping many families connect with their Hindu faith and Indian culture and the backbone of the mission family. Saroja was popularly known as ‘Mrs. Krishnan’ or lovingly called ‘Mummy’ by everyone in Kuwait. Mrs. Krishnan was known for her impeccable memory and ability to chant innumerable shlokas, bhajans and chantings from memory. She was passionate about teaching adults and children bhajans and shlokas and passing on the wealth of her expansive knowledge to everyone who walked into her home. Many people referred to her as the “Grand lady of Kuwait”! She wore vibrant Kancheevaram sarees and enamored everyone with her wicked humor, charm, and wit. She was often called upon to inaugurate many Indian functions with love and respect by the community. As a person, Saroja was bold, determined, and efficient. Before cell phones were around, she was a walking phone book and always knew everyone's number off the top of her head! She was always curious and loved learning, be it her craze for technology, new games like candy crush and was a supreme candy crusher with the level of 2,298 and was so proud of this achievement. Her interest in learning something new every day. She was ahead of her times and sometimes made it hard for us to keep up with her keen interests. She was sharp as a whip and had an amazing memory. Her witty humor and gregarious personality made her the life of any social gathering. She connected with so many and touched the lives of everyone who crossed her path. After Krishnan’s passing in 2008, Saroja came to the US and lived her years with her children, sons-in-law and daughter-in-law in the US and Canada. She became a proud US citizen in 2018. She enjoyed the company of her grandchildren and great grandchildren who affectionately called her Ammama and G-G-ma (great grandmother) respectively. Her passion for cooking and enjoying delicious varieties of food was unsurpassed. Most people know her as the “Idli nazi” for her precise and fluffy dlightful idli. In her heyday, she would be able to whip up dishes to serve over a 100 people with ease and speed. And she has certainly passed down her love for cooking and food to all her kids! She was famous in Kuwait for her utterly butterly “Nai Payasam” ! Although this is a big loss for the entire family, we want to cherish all the beautiful memories and the legacy of this vibrant lady! A memorial service is scheduled for March 22nd from 2:00 pm to 4:00 pm EST at Pierce Funeral Home (9609 Center Street, Manassas, VA, 20110). To commemorate her beautiful life and amazing journey, we would appreciate your support to the below listed charities that Saroja was very passionate about supporting during her lifetime. American Diabetes Association http://main.diabetes.org/site/TR?px=16694922&pg=personal&fr_id=13321 American Cancer Society https://raiseyourway.donordrive.com/index.cfm?fuseaction=donorDrive.personalCampaign&participantID=3405

Our beloved Saroja Krishnan passed away on March 21st, 2022, in Chantilly, Virginia, at the age of 83 years. Saroja is survived by her loving children Usha, Asha Shankar, and Jyothi, their spouses and eight fantastic grandchildren and two great... View Obituary & Service Information

The family of Trichur S. Sarojini created this Life Tributes page to make it easy to share your memories.

Send flowers to the Sarojini family.