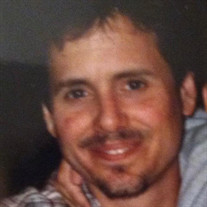 Todd Allen Loggy Sr. was born on December 5, 1966 in Janesville, Wisconsin at Mercy Hospital to Harry and Linda Loggy. Todd passed away peacefully at home on March 24, 2021 after an extended illness with cancer, surrounded by his immediate family. Todd loved his family and enjoyed being active with his sons in youth sports and making sure they had the best of everything for every sport, he made sure they had everything they could want as young boys including ATV’s, Dirt bikes, electric guitars, they named it and he made sure he got it. He was a diehard Green Bay Packers fan and he made sure from the very beginning that his family loved the Packers too. He was a very skilled electrician since the age of eighteen when he started in the trade with R. Archie Burgess. He took great pride in his work as an electrician, and his hard-working hands showed it. He was the earliest of early birds and loved to start his mornings with History Channel or his all-time favorite show Married with Children. His wonderful laugh and smile will be missed. He was predeceased by his mother Linda (Loggy) Berger. He leaves behind his wife Janet, sons Todd Allen Jr., Austin Edwin and his stepdaughter Casey, stepson William and 3 grandchildren, also his father Harry Loggy, brother Jeff, sister-in-law Blanca, niece and god daughter Gabriella and nephew Jacob, along with many aunts, uncles, cousins, nieces, nephews and close friends that he considered family, especially the Burgess family. He also leaves behind his loyal dog (Shadow) Services will be held on Friday, April 2, 2021 at 11:00 am at Park Valley Church 4500 Waverly Farm Drive, Haymarket, Virginia 20169 In lieu of flowers please make donations to Capital Caring Hospice capitalcaring.org

Todd Allen Loggy Sr. was born on December 5, 1966 in Janesville, Wisconsin at Mercy Hospital to Harry and Linda Loggy. Todd passed away peacefully at home on March 24, 2021 after an extended illness with cancer, surrounded by his immediate... View Obituary & Service Information

The family of Todd Allen Loggy Sr. created this Life Tributes page to make it easy to share your memories.

Send flowers to the Loggy family.