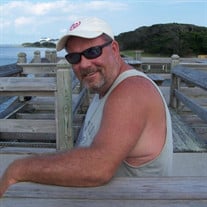 Timothy John Shevlin, 55, of Middleburg, Virginia, passed away on February 19, 2021, after a long and brave fight with prostate cancer. Just as he handled all experiences in life, he managed his illness with strength and grace, and wanted to spend as much time with his loved ones as possible. One his final day, he was surrounded by his family and loved ones. Tim is survived by his love Debbie Castelhano, and his three children; Steven (28), Laura (25), and Shannon (23) Shevlin. Tim also had a wonderful relationship with Debbie's two sons; David (34), and Justin (32) Castelhano. He often visited David and his wife Danielle at their home on Lake Anna, soaking up every moment with his grandsons Greyson (3) and Gabriel (10), who affectionately called him "Papa Shevy". Tim is also survived by his brothers Mike and Bill Shevlin and his sister Barbara Lee. Tim was preceded in death by his parents Dr. William Shevlin and Barbara Suchy as well as his brother Brian Shevlin. Tim loved many things - grilling out, country music, growing vegetables in his garden, testing his luck with scratcher lottery tickets, and planning his yearly beach trip. He visited Emerald Isle, North Carolina every summer with the whole family, (dogs included!), where he hoped to retire one day with Debbie. Tim's family will always remember him by beach sunrises, fresh crab dinners, and walks along the shore to hunt for seashells. Beyond vacation and leisure, Tim loved spending time with his children, and grandchildren more than anything. He never missed an opportunity to have brunch with his daughters, host his grandsons for the weekend, or have Sunday morning phone calls with his son, Steven. He was often the designated driver for winery day trips where he welcomed his daughters' friends as part of the family. He also enjoyed spending weekends attending football games at JMU where he showed off his custom cornhole boards and skills, crushing the competition at tailgates. Tim spent 30+ years working as a Land Surveying Specialist at School & Townsend in Manassas, VA , where he made many close, lifelong friends who felt more like family than coworkers. In lieu of flowers, memorial contributions may be made to The Prostate Cancer Foundation, 1250 Fourth Street, Santa Monica , CA 90401 or online at pcf.org.

Timothy John Shevlin, 55, of Middleburg, Virginia, passed away on February 19, 2021, after a long and brave fight with prostate cancer. Just as he handled all experiences in life, he managed his illness with strength and grace, and wanted to... View Obituary & Service Information

The family of Mr. Timothy John Shevlin created this Life Tributes page to make it easy to share your memories.

Send flowers to the Shevlin family.