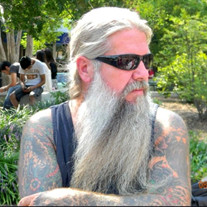 On Sunday, November 7, 2021, Timothy Edward Dunne (more commonly referred to as Gypsy) passed away in his home located in Manassas, Virginia. Tim was the son of Edward and Barbara Dunne (deceased); Brother to Patricia Kines, Judy Frazier, Christine Rice, and Kimberly Derr; Father of Amie Thompson, Samuel Dunne, Barbara Dunne, and their brother Jesse Toups; Grandfather to Paige Thompson, Alyssa Brennan, Jaylen Campbell, Brooklin Thompson, and Trinity Dunne. He was also an uncle to MANY nieces and nephews as well as a friend to countless others. Tim was born July 14, 1959, in Scranton, Pennsylvania and lived a fulfilling 62 years. In that time, he found a passion for truck driving, getting an insane amount of tattoos, and motorcycles. Many people never really get the chance to find their calling in life, but in the 62 short years Tim had with his family and friends, he had found a few; driving tractor-trailers was one. He loved traveling up, down, and all-around from coast to coast and would even bring his children, friends, and other family members along the way. With nothing but an open road ahead and maybe a little bit of traffic, he had nothing to worry about except his next destination; he was free. A little bit later, down the road, his grandchildren came along. There he found a new calling; the calling of Santa Claus! Every year on Christmas Eve, without fail, Tim would call each of his grandchildren and spread a little bit of Christmas magic with a quick “HO! HO!HO!” and made sure that they all left out cookies and milk for him. Hearing the pure joy and excitement in his grandchildren’s voices would make those phone calls worth everything to him! Those phone calls will be missed. Tim had quite a few health issues towards the last few years of his life, but he didn’t let that stop him from being around his family and friends. He was always there for anyone and everyone whenever they needed him and he did it without expecting anything in return. He was the life of the party, a comedian at heart, and a protector in spirit. Anywhere he went he was sure to put a smile on everyone’s face and make their stomachs ache from laughing so much! He was like no one you’ve ever met before and was a unique soul at that; he was the type of person that didn’t change to fit in anywhere. He stood out and enjoyed that about himself; it was truly inspirational. He lived with no regrets; none that I can recall anyway. He loved passionately, worked tirelessly, and lived spontaneously. The man left his mark on this world through so many people. He is a soul that will forever be missed but he will also never be forgotten. We will miss those late-night McDonald’s trips at two o’clock in the morning. We will miss the crazy phrases that he would say or the names he would call us. We will miss the road trips and adventures. We will miss seeing his name come across our phones on Christmas Eve. We will miss the jokes he told and hearing about the stories he was a part of. He may physically be gone, but his spirit lives within all of those things and so much more. He will continue to live within all of the lives he has touched and the memories made with him. With these things, we will remember him and we will carry him with us; ALWAYS! Services for Tim will be held at the Pierce Funeral Home located in Manassas, Virginia. It will take place Saturday, November 20, 2021 from 5 pm until 9 pm; attire is casual.

The family of Timothy Edward Dunne created this Life Tributes page to make it easy to share your memories.

Send flowers to the Dunne family.