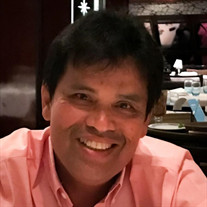 Born: January 23, 1965 Born to Eternal Life: October 26, 2021 Thong Thongsavanh of Manassas, Virginia passed away on October 26, 2021, at the age of 56 after a hard-fought battle with cancer. Thong was a beloved and devoted husband to Michele (Renee De Wein) for 30 years. He was a loving father to his daughter Lillian. Thong enjoyed watching Lilly play soccer, basketball and volleyball. He was her biggest fan. He adored his daughter! Thong was very proud of Lillian graduating from James Madison University as a Registered Nurse with a Bachelor’s of Science Degree. Thong was born in Laos and arrived in the United States as a young teenager. He fled his country during turmoil by boat with his brother Thoune. The two brothers reunited with their brother Toui on the riverbank in Thailand. Thong had the faith and courage to cross that river and believe they would be alive by doing so. He was a courageous human being with an indomitable spirit. All three brothers reunited with their family living in a refugee camp in Thailand before immigrating to the USA. Thong attended King High School in Corpus Christi, Texas and served in the Navy ROTC. Thong met the love of his life Michele in Texas while she was on vacation visiting her brother. He learned his first trade (roofing) from Michele’s brother Christopher. He later moved to Northern Virginia where he and Michele lived happily for 30 years. Thong converted to Catholicism when he and Michele got engaged. In addition to Michele and Lilly, he is survived by his father Khamboth, step-mother Banh, brothers Toui, Thoune (Judy), Amphavanh Butnpunt (Pete), Amphy Thongsavanh and Thothsakanh Thongsavanh. Thong was fond of his mother-in-law Kathleen De Wein. Thong and his brother-in-law Joseph De Wein always had a fierce rivalry between NFL Teams, the Buffalo Bills and the Dallas Cowboys. Thong had a great love for his nieces and nephews. Thong loved his nephew Rhyan like a son. He was so proud of him becoming a phenomenal man with his lovely wife Annabella and their daughters Virginia and Olivia. Thong enjoyed bowling so much he would pick up Rhyan once a week for a game. His nephew Austin prepared fishing videos on YouTube when Thong could no longer kayak and fish. Thong was an avid fan of martial arts expert Bruce Lee. Jordan his nephew, came and spent the whole weekend watching the entire Bruce Lee series with his uncle. Thong was a skilled tradesman, he loved to share his knowledge with his nephews, Joey and Owen, who helped Thong replace our roof. His niece Abi always had a smile and a hug for her uncle. Michael, his nephew, kept Thong up to date on the latest sports news. He was very proud of his niece Myra being accepted into medical school. He adored his niece Amy and her amazing boys Julian, Damien and Simon. Thong loved to watch his great nephews play basketball. When he could no longer leave the couch, Amy live-streamed the games for him-Thank You. Thong worked many years for United Parcel Service and would never pass a fellow driver without shouting “Go Brown”! Thong and Michele loved to travel and vacationed in the Caribbean, Hawaii and Europe in addition to taking several cruises. When he wasn’t working or traveling with Michele, Thong was fishing. He was an avid fisherman (especially bass) and spent many relaxing hours on local lakes, reservoirs and rivers. He took fishing gear on every vacation and often bought additional gear upon reaching the first destination. Thong possessed an unshakable faith in God. He was a devoted parishioner of St. Francis of Assisi in Triangle, Virginia. Rest in peace Thong. You will be missed deeply. Until we meet again in heaven.

Born: January 23, 1965 Born to Eternal Life: October 26, 2021 Thong Thongsavanh of Manassas, Virginia passed away on October 26, 2021, at the age of 56 after a hard-fought battle with cancer. Thong was a beloved and devoted husband to Michele... View Obituary & Service Information

The family of Thong Thongsavanh created this Life Tributes page to make it easy to share your memories.

Send flowers to the Thongsavanh family.