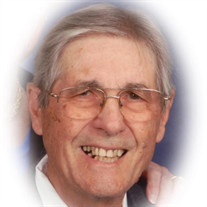 Thomas (Tom) Clair Varley, 88 of Gainesville, Virginia died in peace March 27, 2022 at home with his loving family by his side after Tom was diagnosed with cancer. Tom was born October 9, 1933 in Canonsburg, PA, the son of the late Clifford Clair Varley & Rosamond Weaver Varley. He is survived by his devoted and loving wife of 62 years, Marabeth (Marby) Adams Varley who he married February 5, 1960. Survivors include his beloved children and their spouses, Terrell Thomas Varley (& Valerie), and Kathleen Varley Leslie (& Kevin). Tom loved his grandchildren Brandon T. Varley, Blaine T. Varley, Reese T. Varley, Helena A. Leslie, and John M. Leslie. Tom is also survived by his brother, Orville W. Varley (& Beverly), his brother-in-law, Richard G. Adams (& Kathy), sister-in-law, Kathleen Deming (& Poe), and many nephews, nieces and their families. After serving in the U.S. Army for two years during the Korean War, Tom enrolled in the George Washington University, graduating with a B.A. in Economics & Statistics in 1960, a M.A. in Economics & Statistics in 1962, and a D.B.A, Doctor of Business Administration in 1969. His entire career was spent researching for the defense of our country working with the Office of Naval Research 1962 – 1983, Navy Office for Acquisition Research 1983 – 1985, Management Consulting and Research, Inc. 1985 – 1988, Institute for Defense Analyses1989 – 1999 (Full time), and Institute for Defense Analyses, 1999 – 2014 (Consultant). Moving from Fairfax, Virginia to the Landings in Savannah, Georgia with Marby in 1999, Tom enjoyed playing golf three times a week, making new friends, and being a member of Skidaway Island United Methodist Church. Traveling to Virginia monthly as a consultant for the Institute of Defense Analyses allowed Tom to see family & friends there regularly. He and Marby moved to Gainesville, Virginia in 2017. A Memorial Service will be held at a later date in Virginia. Memorial gifts may be made to the American Cancer Society, American Diabetes Association, or Alzheimer’s Disease Research. To live in hearts we leave behind is a loving legacy.

Thomas (Tom) Clair Varley, 88 of Gainesville, Virginia died in peace March 27, 2022 at home with his loving family by his side after Tom was diagnosed with cancer. Tom was born October 9, 1933 in Canonsburg, PA, the son of the late Clifford... View Obituary & Service Information

The family of Thomas Clair Varley created this Life Tributes page to make it easy to share your memories.

Send flowers to the Varley family.