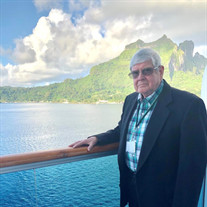 Col. Thomas (Tom) John Stubblebine, retired, age 77 of Haymarket, VA, was called to the Lord on April 25, 2022 while surrounded by his loving wife of 54 years and his 2 daughters. Tom was born in Reading, PA, and grew up in West Philadelphia. Through the encouragement and mentorship of a grade school track coach, Tom became the first in his family to attend college after earning a track scholarship to St. Joe’s University. After graduation, he joined the Air Force and began his 26-year career, retiring as a Colonel in 1992. After retiring from the Air Force, he began a second career as a government contractor. Tom was also a devout Catholic and was passionate about his faith. Anyone who met him would agree that Tom loved life, and particularly loved traveling and exploring the world. He extensively toured Europe while being stationed there (twice), then later in life developed a passion for taking cruises. He took over a dozen cruises with his last one being to Bora Bora. His passions included singing, the sport of golf, and the Philadelphia Eagles. Tom is survived by his wife, Mary, and his daughters Chelie VanBelleghem (Dan) and Hollee Alexander (Andy) and seven grandchildren: Emma and Charlotte Billingsley; Rylee and Finley Alexander; and Daniel, Kathryn and Elizabeth VanBelleghem. Preceding him in death were his parents Robert and Helen Stubblebine, his brothers Jim and Jack, and his sister Anne McMenamin. Family and friends will gather at a Memorial Mass at 12:00pm on Sat., May 7, 2022, at Holy Trinity Catholic Church, 8213 Linton Hall Drive, Gainesville, VA 20155. A reception will be held immediately after the mass in the parish hall. A Christian burial will follow at Arlington National Cemetery at a later date, to be determined. In lieu of flowers, please consider making a donation in loving memory of Tom to the American Heart Association

Col. Thomas (Tom) John Stubblebine, retired, age 77 of Haymarket, VA, was called to the Lord on April 25, 2022 while surrounded by his loving wife of 54 years and his 2 daughters. Tom was born in Reading, PA, and grew up in West Philadelphia.... View Obituary & Service Information

The family of Thomas John Stubblebine created this Life Tributes page to make it easy to share your memories.

Send flowers to the Stubblebine family.