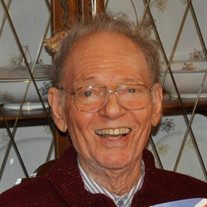 Thomas (Tom) Phelps Potter, Sr., age 82, passed away peacefully surrounded by family at his home in Haymarket, VA, on Friday, February 5, 2021. He is predeceased by his parents, Thomas Humphrey Phelps Potter and Millicent Leticia Sims Potter. He is survived by his wife, Joyce Ann Elizabeth Cornell Potter, sons Timothy E. (Kathryn) Potter of Warrenton, VA and Thomas Phelps Potter, Jr. (Connie) of Lovettsville, VA. He is also survived by six grandchildren: Bryan Potter of Warrenton, VA, Brenna Potter of Joppa, MD, Nicholas, Virginia, Andrew and Klara Potter of Lovettsville, VA. He will be missed by his four sisters-in-law: Claudia, Shirley, Carolyn and Brenda (Lee) as well as several nieces, nephews and cousins both in the United States and England. Tom was born July 20, 1938 in Seer Green, Buckinghamshire, England. He immigrated with his parents to the United States, arriving at Ellis Island in New York Harbor on November 25, 1947. Tom grew up in Arlington, VA and graduated from Washington & Lee High School in 1956. He then attended two years of college at Shenandoah College; one year in Dayton, VA and one year at the Winchester, VA campus. Tom next attended Cumberland College in Williamsburg, KY for two years, completing undergraduate degree with some courses at the University of Kentucky in 1963. Finally, during his tenure with Pan Am, Tom received his Master’s Degree as a Certified Travel Consultant from George Washington University. Tom was drafted for service in the US Army in the summer of 1963 and served on active duty for 11 months at Ft. Hood, TX with the 3rd Armor Division and 13 months in Southeast Asia in the 1st Calvary Division. He then spent the next 4 years in the U.S. Army Reserves. Tom began his career in the travel industry in1966 working for United Airlines. He went on to work for Trans Caribbean Airways (acquired by American Airlines in 1971). He then worked for National Airlines and Pan American World Airways over a period of 20 years. He enjoyed taking his travel agent colleagues on “familiarization trips” to London, behind the Iron Curtain in Eastern Europe, China and countless other destinations around the world. During his Pan Am years he thoroughly enjoyed working with the USO as well as the USFL Washington Federals Football team with their travel needs. After the dissolution of Pan American Airlines in December 1991, Tom created Mid-Atlantic Travel Marketing in January 1992 and began representing Trafalgar Tours. Over the next 15 years he represented over 31 different travel companies which included Key Tours, Insight Tours, Contiki, Thrifty Rental Cars & Viking River cruises. After 41 years, Tom retired from the travel industry in 2007. Tom was active in the Washington, DC Chapter of Bon Vivant, a travel club, where he served as Secretary, Treasurer, Vice President and President. He was also a proud member of the Washington, DC SKAL Club. Throughout his life, Tom was active in his community. He was a Coach for his boys’ various sport teams and was a role model for other young men in the Bailey’s Cross Roads, VA community. He was a member of the Vestry at St. Paul’s Episcopal Church in Bailey’s Cross Roads for 12 years and spearheaded a number of community outreach programs which reached hundreds of people in the community. He was a proud member of Grace Episcopal Church in The Plains, VA. He was also an ardent fan of all of the Washington, DC sport teams. Thomas P. Potter, Sr. was a man who lived a robust, vibrant life and who went by many names. "Tom" leaves behind the love of his life of 54 years, Joyce. She is grieved with his passing, but knows he is no longer suffering and is with his Lord and Savior in Heaven. He was her favorite "Duckie" and she was his "Bear". They could pick on each other, but woe betide the person who would pick on either one of them! Their love endured all the various stages of life - all of the "for better or for worse" they said in their vows so many years ago. Their legacy of love is one of the biggest gifts they gave to their children and grandchildren. "Dad" also leaves behind his sons, Tim and Tom, and their wives, Kathy and Connie. The lessons he gave each of us of love of country, true friendship, the importance of family and dedication to faith we will cleave to as we move forward in our journeys as parents, friends, and citizens of our communities. Finally, his proudest legacy, what he lived for every day, his biggest pride and joy, "Pop" left behind six wonderful grandchildren; Bryan, Nick, Virginia, Brenna, Andrew and Klara. Each grandchild had a unique relationship with their Pop. He had a wonderful way of knowing everything that was going on in their lives and having a conversation with each of them. No detail was too small. He celebrated their accomplishments and interests. He was compassionate when it came to their struggles and disappointments. The "Grandkiddies" know, without a doubt, they are loved beyond measure, but they will miss their Pop. His final notes we feel should be in quotes. “America is the greatest country in the world. The people are kind and generous. As an immigrant, I am proud to be an American.” Due to Covid-19 restrictions, funeral and internment services have been postponed. A Celebration of Life in Tom’s honor will be held at a later date. In lieu of flowers, memorial contributions may be made to The Salvation Army: https://www.salvationarmyusa.org/usn/ways-to-give/ Condolences may be sent to: www.piercefh.com

The family of Thomas Phelps Potter Sr. created this Life Tributes page to make it easy to share your memories.

Send flowers to the Potter family.