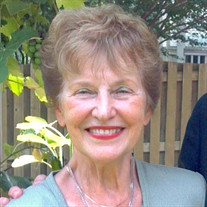 Theresa Gwizdak Harrigan was called home to Our Lord on April 11. Theresa was born on June 2, 1934 in Barnesboro, PA, but spent most of her formative years in Stamford, CT. There she graduated from Sacred Heart Academy as the President of the class of 1952. Upon graduation, Theresa worked as the lead executive secretary at a large legal firm. Theresa married her devoted husband, Kevin, on August 10, 1963. His assignment with the FBI took them to New Orleans, LA, where they resided until 1980. They then relocated to Fairfield, CT, and remained there until 2006; Theresa and Kevin eventually moved to Manassas, VA, in order to be closer to their children and many grandchildren. Theresa will be remembered as a vivacious, outgoing person who loved people and easily befriended everyone in the room with her brilliant smile and sharp wit. She was a devout Catholic and a member of All Saints Church in Manassas. A strong pro-life advocate, she saw the beauty and value of every human life, especially among the most innocent. She meaningfully connected with all those she met, no matter how brief the encounter; Theresa never forgot a name or a face and experienced great joy in her abundant capacity for friendship. Theresa will be sadly missed and is survived by her husband of 58 years, Kevin J. Harrigan, and by her four children: Michael Harrigan (Maggie), Irene Kelly (Brendan), Kathy Foeckler (Michael), and Mary Beth Ellis (Bennett). She was further blessed to give legacy to 20 grandchildren and 4 great-grandchildren whose lives and well-being were always of her utmost concern. A visitation will take place at Pierce Funeral Home on Thursday, April 21st from 6:00-8:00 PM (9609 Center Street, Manassas, VA, 20110). A Mass of Christian Burial will be celebrated the following day, April 22nd, at All Saints Catholic Church at 10:30 AM (9300 Stonewall RD, Manassas). Immediately following the Mass, a reception will be held at the adjoining Knights of Columbus Hall. All are invited to attend these proceedings. A private burial will take place on Monday, April 25th, at Quantico National Cemetery. In lieu of flowers, please offer your masses and prayers, especially her favorite - the Chaplet of Divine Mercy - for the peaceful repose of Theresa’s soul.

Theresa Gwizdak Harrigan was called home to Our Lord on April 11. Theresa was born on June 2, 1934 in Barnesboro, PA, but spent most of her formative years in Stamford, CT. There she graduated from Sacred Heart Academy as the President of the... View Obituary & Service Information

The family of Theresa G Harrigan created this Life Tributes page to make it easy to share your memories.

Theresa Gwizdak Harrigan was called home to Our Lord on April...

Send flowers to the Harrigan family.