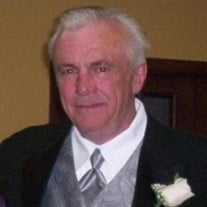 Terry Lee Eberhart, October 27, 1948, age 72, of Haymarket, Virginia, is now dancing in Heaven with his love, Bonnie Lou. Terry suddenly passed away on Saturday April 17, 2021. He is proceeded in death by his wife, Bonnie Lou Eberhart; his parents, Robert & Doris Eberhart; one son, Tony Chris Hall and by one brother Craig Eberhart. He is succeeded by his two sisters Vicky Dean and her Husband Bill; Roxane Wildeboer and her husband Larry; and one brother Gary Eberhart and his wife Brona. Terry will be missed by his Children: Troy Hall and his wife Irene; Tammy Lier and her husband Charles; Tosha Lee Eberhart; Robert Lee Eberhart; and Rick Eberhart. Terry also leaves behind fourteen grandchildren: Troy Hall Jr, Aidan Hall, Elise Hall, Tony Hall Jr, Jacob Northam, Joshua Northam, Connor Lier, Donovan Lier, Alexis Charoensiri, Robert Eberhart Jr, James Eberhart, Jayden Eberhart, Brady Eberhart and Blake Eberhart; and one Great Grandchild Morgan Hall. Terry worked as Chief Engineer of Maintenance most of his life. He drove tow trucks and tractor trailers in his younger years. He retired when he was 68. The Man, The Myth, The Legend: that was our dad. It's hard to put down in words everything that I want to say. Dads are someone to look up to, someone to follow, someone to admire, someone to be proud of and someone to brag about, someone to hold and someone to cry with, someone to learn from and someone to respect, someone to listen to and someone to talk to; someone to try and impress, sometimes rebel against, and someone, most of all, with whom to share everything this wonderful life has to offer. We are so incredibly grateful that we can tell you that we have had all this and much, much more with our dad, Terry. To say we loved our dad would be an understatement and to say we will miss him would be an even greater understatement. Our dad was a devoted husband to one, a wonderful father to five, a loving grandfather to fourteen, and a great-grandfather to one. This isn't good-bye; it's we will see you later.

Terry Lee Eberhart, October 27, 1948, age 72, of Haymarket, Virginia, is now dancing in Heaven with his love, Bonnie Lou. Terry suddenly passed away on Saturday April 17, 2021. He is proceeded in death by his wife, Bonnie Lou Eberhart; his... View Obituary & Service Information

The family of Terry Lee Eberhart created this Life Tributes page to make it easy to share your memories.

Send flowers to the Eberhart family.