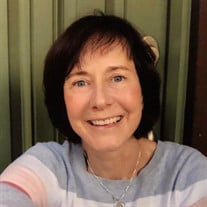 After an extraordinary and well lived life, Tara D. Kott, of Nokesville, Virginia, died a gentle and dignified death at home with her parents and family on November 11, 2021. Tara was born on August 26, 1963 in Honolulu, Hawaii to Stephen J. Kott and Julia J. Kott. Her father, a Marine aviator was killed in action in Vietnam on October 31, 1967, and Tara was raised by her mother Julie and stepfather Chris Christy a career Marine officer. She was known for her relentless thirst for knowledge, pursuit of excellence, and uncompromising commitment to family and friends. Tara was the Valedictorian of Camp Lejeune High School in 1981, and received the prestigious Morehead Scholarship at the University of North Carolina at Chapel Hill. She then acquired her teaching certificate at George Mason University and taught at Wakefield High School in Arlington, Virginia. Tara had a keen interest in science and went on to earn her Master of Nursing at the University of California San Francisco where she was an oncology nurse. Tara was a passionate adventure seeker and an avid boater and nature lover. She traveled extensively and climbed to the peak of Mount Fuji, and hiked and camped in Colorado, Yosemite, and the Redwood Forest. She finished several Marine Corps Marathons and completed a triathlon. She walked countless miles along the beaches of Emerald Isle, North Carolina and Long Boat Key, Florida, and was most at home in warm weather near moving water and a sandy beach. Tara's greatest joy was helping to raise her son Luke Neal, with her longtime friend, Kim Neal. Tara was most proud of her son's outstanding achievements which culminated in his acceptance to the freshman class at Yale University where he plays varsity tennis. Tara was preceded in death by her father, Maj. Stephen J. Kott, and is survived by her son Luke, her parents Julie and Chris Christy, her brothers Steve, Jack and Jeff, sister Cristy, and aunts, uncles, nieces and nephews. Tara's spirited enthusiasm and genuine compassion made the world a better place. She is forever loved and will always be missed. In lieu of flowers, Tara preferred donations to Mercy Ships or Doctors Without Borders. Memorial Services will be held at 1:00 p.m. Friday November 26th at the Manassas Presbyterian Church, 8201 Ashton Avenue, Manassas, Virginia 20109

After an extraordinary and well lived life, Tara D. Kott, of Nokesville, Virginia, died a gentle and dignified death at home with her parents and family on November 11, 2021. Tara was born on August 26, 1963 in Honolulu, Hawaii to Stephen J.... View Obituary & Service Information

The family of Tara Dawn Kott created this Life Tributes page to make it easy to share your memories.

After an extraordinary and well lived life, Tara D. Kott, of...

Send flowers to the Kott family.