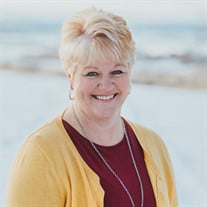 Tamara (Tami) Lynn Wade was born 1 November 1962 in Burlingame, California to Jay Preston Kaniuth and Nancy Kathryn Reed Kaniuth. She was the oldest of their two children. Tami was raised in San Bruno, California where she attended her elementary through high school years. She loved spending time with her dad hunting and fishing where she gained a love for the outdoors. She attended Ricks College in Rexburg, Idaho receiving an AA in special education and then returned to California where she and a friend from Ricks rented an apartment. Tami started out and worked as a dental x-ray technician for several years. During this time, she attended Institute, a religion class, at San Mateo college where she met her future husband. She initially thought he was obnoxious but eventually he was able to win her over and asked her to marry him. On 8 June 1985, she married Craig Scott Wade in the Oakland Temple of the Church of Jesus Christ of Latter-day Saints. They had 3 living children, Heidi, Erin, and Bryce Wade while living in the Bay Area, after which they moved to Virginia where Craig’s job took him. Tami took up and became passionate about photography which she was able to turn into a successful business, Wade Outside Photography. People enjoyed her photography, and she gained many loyal customers who requested family and senior pictures. When she was not doing Senior or family pictures, she was touring Virginia towns and universities taking pictures and making collages and going to Virginia towns selling her collages at the local fairs. She was very successful, and her pictures are hanging all around Virginia where many express their pleasure and satisfaction of the pictures they have in their homes and offices. She recently developed symptoms where she had trouble breathing. Tami eventually ended up in the hospital for a couple of weeks before she succumbed to a rare disease that affects the immune system. She died on 5 November 2021 where her husband and daughters were able to be at her bedside when she took her last breath. Tami is survived by her mother, Nancy Kaniuth, her husband, Craig Wade and her children, Heidi Richards, Erin Hamner and Bryce Wade. She has five grandchildren who will miss her dearly as the rest of her family. Her family and friends will be able to pay their respects on 11 November 2021 at a viewing from 6:30-8pm and the funeral on 12 November 2021 at 1:00, both located at the Church of Jesus Christ of Latter-day Saints at 14105 Glenkirk Rd, Gainesville, VA 20155. The Internment will follow at Bright View Cemetery at 3:00pm in Warrenton, VA.

Tamara (Tami) Lynn Wade was born 1 November 1962 in Burlingame, California to Jay Preston Kaniuth and Nancy Kathryn Reed Kaniuth. She was the oldest of their two children. Tami was raised in San Bruno, California where she attended her elementary... View Obituary & Service Information

The family of Tamara Lynn Wade created this Life Tributes page to make it easy to share your memories.

Send flowers to the Wade family.