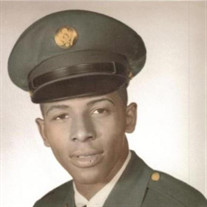 Sylvester Randolph Burrows, Jr. transitioned peacefully on January 29, 2021. Sylvester affectionately known as “Pocky” or “Sly” among family and friends was born on March 17, 1940 in Washington, D.C. He was the second eldest son of his parents the late Sylvester (Vest) Sr. and Consenetta Burrows. Born and raised in Washington D.C. Sylvester graduated from Eastern High School. Shortly after high school, he enlisted in the Army to complete NOC Training. His military training and service prepared him for a career in engineering. In 1965, he worked in the Amecom Division at Litton Systems from 1965 to 1975. During this time his interest in electrical and engineering became his specialty. He was promoted to receiving inspections as a microwave component tester and landed as a junior engineer position in 1975. He was the youngest engineer at his company during this time and the only African American. Sylvester was still serving his country with the District of Columbia Air National Guard as a Radio Relay Repairman, while also attending AAEC School of Business. During his tenure with Litton, he completed various training to enhance his skills, such as completing the Industrial Course of Digital Fundamentals. He continued to excel in his career by attending the AAEC School of Computer Training for Cobol in 1975 and completed certifications at Prince George Community College for Basic Electronics in 1976. His work ethic and business commitment would remain throughout his career until he retired. Sylvester loved family and was always such a proud father. His greatest joy was spending time with family. A devoted and loving father, husband, brother, grandfather, great grandfather, uncle, son, and friend. When Sylvester met Betty, they married and from this union together they had three lovely daughters. He was a fun-loving father with a warm smile and a big heart. His love for his family was as dedicated as his work. As a Washingtonian, he loved the sports teams, playing baseball and attending games with his family or going to family fun events. Photography was a hobby which he thoroughly enjoyed, and golfing was his favorite pastime. Sylvester loved to travel and explore the world. His expectations were always set high. He enjoyed life and lived it to the fullest. Born on St. Patrick’s Day he always felt lucky. He would joke about having the luck of an Irishman and his daughters would describe him as “happy go lucky”. His charm, charisma and that infectious smile would light up a room when he entered. Although, his union with Betty ended they remained good friends throughout the years. Much later, Sylvester got married to, Patricia, and upon their marriage ending he met and married Lorinda. In his later years after retiring from his profession, “Pocky” would make it his priority to attend all family celebrations. If there was a graduation he was there, birthdays, weddings, or any event big or small for any family member he would attend. His family was his priority, his commitment was honorable, his dedication commendable and will forever be remembered. Sylvester was preceded in death by his father Sylvester Sr. and mother Consenetta, stepmothers; Isabell and Lynell along with siblings Richard, Robert, Tyrone, Frederick, Michael, Nathaniel, Lawrence, and Cynthia. He is survived by his two ex-wives Betty and Patricia and estranged wife Lorinda, (3) dedicated daughter’s Ivy, Tonya, Sharon, (15) Grandchildren; Shavonne, Laura, David, Sasha, Cardell Jr., Savannah, Little Ivy, Ulysses, Samone, Iyonna, Travis, Trevor, Breonna, Troy and Angel, (12) Sisters; Veronica, Helen, Shirley, Sylvia, Arlene, Darlene, Tonya, Carlithea, Geraldine, Diane, Wanda, Stacy (6) Brothers; Ronald Bruce, Ricardo, Reginald, Dwane, Darryl, (22) great grandchildren, a host of nieces, nephews along with many other family, relatives and friends.

The family of Sylvester Randolph Burrows Jr. created this Life Tributes page to make it easy to share your memories.

Send flowers to the Burrows family.