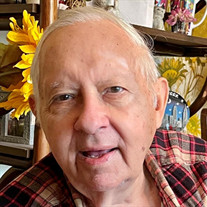 Steve Butchock of Manassas, VA passed away with his daughter by his side on July 13, 2021 at the age of 86 years. He was born to Steve and Garnett Butchock in Uniontown, PA in 1934. Steve married Patricia Rose Butchock (Younis) in November of 1963 and had one daughter, Mona. Steve graduated from the University of Pittsburgh in 1957 and enjoyed a successful career as a sports journalist. Steve wrote for several newspapers over the years, beginning with the Pittsburgh Post Gazette and later, The Washington Star. Steve later wrote, published, and printed his own football newspaper, The Redskins Journal, and medical devices patent magazine, Medical Devices Report (MDR), both of which enjoyed successful runs for many years. Steve was passionate about sports and was a huge fan of the Pittsburgh Steelers, the Pittsburgh Penguins, and the Pittsburgh Pirates. As a sports journalist, he frequently traveled around the country to interview athletes and report on sporting events. Steve used to take Mona along to expose her to the world of sports and journalism, and together, they shared many adventures. On one such adventure, Steve and Mona met five of the Los Angeles Lakers in an elevator in 1974, much to Mona’s excitement, permanently cementing Steve and Mona’s bond through the love of sports. In addition, Steve greatly enjoyed his work as a football and basketball referee and timekeeper for almost 50 years. He made many close friends over the years during his 19 years of service with The Northern Virginia Football Officials Association and was awarded after 25 years of outstanding and dedicated officiating services with The Washington District Football Officials Association. Throughout his life, Steve exuded love for plants, animals, and nature. Steve spent many years tending to his vegetable garden and enjoyed being outdoors throughout the year. He will fondly be remembered for his affection for his cats. Lastly, Steve loved attending dances and 1950’s-60’s Rock & Roll live music events at the Moose Lodges in Winchester and Front Royal, VA. Steve, his wife Patty (deceased), and Dolores, his sister-in-law, were the life of the party at the Moose lodges over the years. This dynamic trio made friendships which spanned decades as Steve planned multiple social gatherings throughout the year.Steve will be lovingly remembered by his daughter, Mona Butchock, sister, Marlene Sunyak, nephew Paul Sunyak, sister-in-law Dolores Younis, niece Michele Weir and husband Dave Weir, great-nephew, Bailey Weir, and great-niece Katie Weir. Visitation will be held on July 23, 2021 at 2:00pm at Pierce Funeral Home at 9609 Center St, Manassas, VA 20110 and the funeral service will be held at 3:00 pm.

Steve Butchock of Manassas, VA passed away with his daughter by his side on July 13, 2021 at the age of 86 years. He was born to Steve and Garnett Butchock in Uniontown, PA in 1934. Steve married Patricia Rose Butchock (Younis) in November of... View Obituary & Service Information

The family of Steve Butchock created this Life Tributes page to make it easy to share your memories.

Steve Butchock of Manassas, VA passed away with his daughter...

Send flowers to the Butchock family.