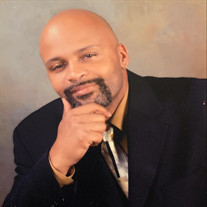 Stephon Edward Payne was born on April 15, 1963, in Leesburg, Virginia to the late Charles Marcellus Payne, Sr. and Helen Elizabeth Payne. He was the sixth of six children born to this union. He attended Herndon High School in Herndon, Virginia. He was a member of First Baptist Church, Sterling, Virginia and was baptized by the late pastor, Rev. John Wesley Thornton. He was a devoted father to his only child, Nishaylen Smith, from a previous marriage. Affectionately known as PawPaw, he adored his four grandchildren. Stephon was employed by 495 Trucking Company in the 90’s. He pursued his passion for driving dump trucks; and along with Cheray, opened, Poppy’s Trucking in the early 2000’s. He worked for Verizon for over 12 years as a Network Operations Specialist. His final place of employment was with Peterbilt in Haymarket, Virginia. Stephon and the “love of his life”, Cheray Lynn Pitts-Tucker were married on September 20, 1997, in Sterling, Virginia. He was her all-and-all and they were inseparable. Stephon was the chef in the family. He was an avid fisherman like his father. He enjoyed fishing with his brother-in-law, Ray “Shampoo” Williams and Gwindell “Cuzzo” Johnson, who was one of many favorite cousins. He loved riding his motorcycle with his father-in-law, James “JP” Pitts. Stephon was a protector of many, including his God Children Shaquiya and CJ, his sister-in-law, Patrice Tucker-Nunez, his wife and her “777” Sisters. The Payne’s loved their family and friends and enjoyed hosting events, cookouts, and parties. When it came down to business, he and Cheray’s stepfather, Charles Tucker, where thick as thieves and Charles served as his mentor. His mother-in-law, Gail “Mom” Tucker, was the “chef to the chef” and spoiled him rotten. Stephon and his childhood friend, David Testerman, were like brothers; they shared many interests and stood as each other’s Best Man. Stephon stepped up to be like a brother to his cousin Gina, who considered him her best friend. Stephon knew how to pray and knew that was his job at Beverly’s house. He “laid hands” and prayed for Charles Tucker when Charles was in excruciating pain. Stephon leaves to cherish his loving memory: wife, Cheray Payne; daughter, Nishaylen Smith (Shamar); grandchildren, Josiah Hogan, Jaylonee, Janiyah and Eli Smith; sisters, Carolyn Newton, Beverly Walker, Karen Williams (Ray), Lisa Keating; brother, Charles Payne, Jr.; Great Aunt, Grace Every; and a host of nieces, nephews, cousins, and friends, who were all special to him. To watch the livestream of Stephon's service, please use this link: https://www.youtube.com/watch?v=B1yaF61cstI

Stephon Edward Payne was born on April 15, 1963, in Leesburg, Virginia to the late Charles Marcellus Payne, Sr. and Helen Elizabeth Payne. He was the sixth of six children born to this union. He attended Herndon High School in Herndon, Virginia.... View Obituary & Service Information

The family of Stephon Edward Payne created this Life Tributes page to make it easy to share your memories.

Send flowers to the Payne family.