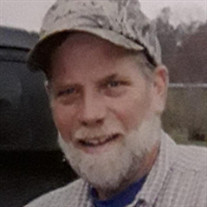 Stephen “Horne” Allan Langhorne, 70, passed away at his home in Manassas, Virginia, on May 11, 2021. Stephen was born on February 8, 1951, to Raymond and Mary Langhorne in Washington, D.C. Stephen “ Horne" grew up in Annandale, Virginia along with his three older siblings, Raymond (Ray) Langhorne, Mary Louise Langhorne, and E. Larry Langhorne. He retired after a long career with the City of Alexandria after moving to Manassas. Upon retirement he continued to be an avid hunter, fisherman, relic hunter, enjoying music and also took pride in landscaping his and other family members homes. In addition, prior to retirement, he played bass for a local group called The Stone River Band for many years. He enjoyed spending time with his nephews and grandchildren in the outdoors. He loved old and new horror movies, Family Guy, American Dad, but mostly watching the Washington Nationals. He also spent time with special friends and family at Fred and Son Used Auto Parts and Collectibles. Stephen leaves behind his wife of 31 years, Theresa, one daughter, Ginny Stone (David), his brothers, Ray and Larry, his sister, Louise, grandchildren, David Allan (Beth and great granddaughter Ashlyn), Tristan, Stephen, Bailey, and Riley, brother-in-law, Doug Jaynes (Susan), nephews, Matthew, Kevin, Sam, great nephew, Bradley, sister-in-law, Lois Chandler, mother-in-law, Johnna Chandler. While he leaves behind many lifelong friends, there are many special friends that he considered family and were with him through the end. Stephen and his family greatly appreciate the special kindness and attention given to him during his illness. A special thanks to Doug, Bill, Leon, Nancy, Ginny, Margaret, Jan, Dee, Butch, Dave, RB and Diane, John, Eddie, Wanzer, Steve2, Donnie, Denise and Blondie, Carmen and Family, and Pat. The family would also like to thank the Hospice Team who attended him. A celebration of Stephen`s (Hornes`s) life will be held at a later date. He is now at peace and reunited with his beloved cat, Storm, and those who went before him. In lieu of flowers, donations may be sent in loving memory of Stephen Allan Langhorne to: Capital Caring Health, Philanthropy, 3180 Fairview Park Dr, Headquarters/Suite 500, Falls Church, VA 22042 or online at www.capitalcaring.org. Condolences may be sent to: www.piercefh.com

The family of Stephen "Horne" Allan Langhorne created this Life Tributes page to make it easy to share your memories.

Stephen “Horne” Allan Langhorne, 70, passed away at his home...

Send flowers to the Langhorne family.