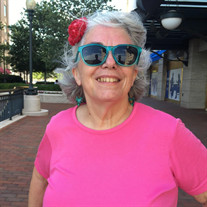 Sharon Bassler sent one last worldly gesture to loved ones June 10th, 2021 at 6:02pm with a rainbow outside of iNOVA hospital. Despite Ovarian cancer and two strokes trying to tell her what she couldn’t do, she spent her last week as she spent her life--defying expectations and hearing stories of her impact from loved ones. Thankfully, God broke the mold with Sharon on January 11th 1951, born to her parents James Emmitt Marable and Abby Jean Gary in Fairfax, Virginia. She learned her otherworldly compassion for others early on from her older brother Greg, who made sure not a baby picture of “Suzie” could be found without his arm around her. From donning her cowboy gear and playing make believe to communicating with woodland creatures, much of her quirky and caring personality can be credited to a loving, outdoorsy, and genuinely selfless family. Sharon’s mystique caught the attention of her future husband Peter Bassler, who knew that he would be foolish not to woo Sharon with his many long bike rides to her house. Despite the assistant principal who disciplined them for holding hands, on January 20th, 1973 at Oakton Methodist Church, Pete succeeded in marrying his high school sweetheart. Sharon spent much of her early marriage saving her paycheck from the DMV to go on camping trips with her two pets: a droopy basset hound George and her husband Pete. Phrases like “God don’t like ugly” and “a wrong turn is simply an excuse for a road trip” were words that Sharon lived by on a daily basis. Her road trip as a fulltime mother began in 1988 with the birth of her son Robby Bassler. While Sharon was busy saving every memento of her son, Robby learned quickly that his mom’s endless patience and unconditional love was something he should emulate as best as he could. In addition to being able to find joy in every moment, Sharon also saw when people needed support without them saying a word. She had an endless supply of candies and clippings from the funny pages carefully selected to give others a boost of joy when they needed it most. She also saw the best in everyone she encountered. In 1993, her selflessness, patience, and high expectations of others made her the perfect teacher’s assistant in a classroom of students with multiple disabilities at Meadowland Elementary. Here she began a career of making adaptive art supplies for students with physical impairments, learning sign language so she could communicate with students who were deaf, and spreading joy to kids she didn’t even teach as the most eccentrically dressed educator in the building on any spirit day. Everyone who ran into Sharon in the hallway realized that she was someone to look up to and the people who joined her in her mission quickly became her second family. From the Meadowland Mustangs who first sparked her joy in the classroom to the endless inside jokes and stories of her Forest Grove Falcons to the considerate flexibility conveyed by the Labradores of Legacy, the members of her school family are too numerous to be named here. However, if you have ever seen Sharon uncontrollably jiggling with laughter in her Winnie the Pooh sweatshirts at field day or borrowed one of her many ridiculous hats, then you should already know that you are part of her family. While the mascots on her shirts and the faces at her happy hours changed many times over the years, her belief that everyone deserves deep respect and ambitious expectations never changed. She never saw getting songs like “little red caboose” stuck in all of our heads as work and thus frequently laughed at the idea of retiring. In fact, she continued to join her classes virtually through COVID and chemo treatments alike, even refusing to pass away until just one day before the kids left for summer--a true Sharon-length vacation. She passed on her love of education to her son Robby Bassler and left her husband Peter Bassler to talk to her through all of the critters in Hamilton. She passed on her ability to ride inflatable bulls, eat cheese balls out of the barrel, and appreciate life’s little beautifuls to her brother Greg Marable, sister-in-law Debbie Marable, and nephews Scott and Steve Marable. To her brother-in-law John Bassler, sister-in-law Sally Bassler, sister-in-law Dianne Harrah, and brother-in-law Bill Harrah--she left greeting cards for holidays we didn’t know existed, loving conversations, and the invaluable knowledge that their brother Pete was under the best of care. While Sharon’s spirit can be found in each and every life she touched, you can see her lovely smile one last time at Pierce Funeral Home Saturday June 26th at 10am and begin celebrating her life at 11am. At noon, you are invited to travel with us to Stonewall Memory Garden to see the view she requested of her parent’s grave nearby. Following her interment, everyone is welcome to join us at a true Sharon-style potluck at Manassas Battlefield Park Picnic area for food, drinks, and stories of this amazing woman we are blessed to have known. Silly hats are encouraged.

Sharon Bassler sent one last worldly gesture to loved ones June 10th, 2021 at 6:02pm with a rainbow outside of iNOVA hospital. Despite Ovarian cancer and two strokes trying to tell her what she couldn&#8217;t do, she spent her last week as she... View Obituary & Service Information

The family of Sharon Louise Bassler created this Life Tributes page to make it easy to share your memories.

Send flowers to the Bassler family.