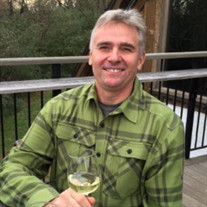 Scott Walters April 7, 1962 – March 23, 2021 Beloved husband, father, brother, and friend, Scott Walters, 58, passed away peacefully at home on March 23. As was befitting to their life, his loving spouse was by his side. Scott delighted in helping others and celebrating their happiness. He was devoted to his country and led a hero’s life, with a distinguished career in both the United States Marine Corps and the United States Air Force (DC Air National Guard) for a total of 34 years of military service. In his civilian life, Scott served through his career at the US Department of State. Scott also served his community through his involvement in the Nottoway Park Community Garden and as the President of his Homeowner’s Association where he especially enjoyed maintaining the neighborhood playground. When asked how he wanted to spend his retirement, he replied, “I just want to help people and make them happy.” His passion for his country was second only to his devotion to his family. His love for his two children, Joseph and Erica, knew no bounds and was evident in everything he did. Nine years ago, Scott met Erica Meadows, and they married in a joyful celebration of their love in May 2018. Although their time together was unfairly short, every day was filled with love and caring, even during challenges such as Scott’s military deployment, subsequent years of illness and COVID quarantine together. Their devotion to each other remains unshakable. True to his Wisconsin roots, Scott loved outdoor adventure. Whether exploring hiking trails, deer hunting, camping or just a picnic in the backyard, he was always happy when he was in nature, especially when he was surrounded by the family and friends he loved so dearly. Scott remained cheerful even in his final days, gracing his loved ones daily with his beautiful smile. He always had warm words of encouragement to offer and a joke to bring out laughter. The memory of his courage, kindness, generosity, and sense of humor will remain in the hearts of all who knew him. Scott is survived by his wife, Erica Meadows; his children, Joseph and Erica (Dave Meier) and their mother, Maria; Erica’s children, Michael (Khanh Mi), Alec (Grace Wagner) and Madeleine (Jackson) Franks; his brother Dean (Paula) Walters and sisters Debbie (Larry) Cashatt, Dawn (Denny) Reckner, Diane Walters, Denise (Tim) Yarie, Doreen (Jimmy) Jasperson, Dana Ohde; Shellee Walters Sabatke, Jonathan Walters, Sherry Walters; and his nieces and nephews. He was preceded in death by his parents, Joyce and Lawrence Walters. Scott will be laid to rest at a future date at Arlington National Cemetery. In lieu of flowers, donations may be made in his name to Fisher House at Walter Reed National Military Medical Center – [email protected] or 301-294-8560.

Scott Walters April 7, 1962 &#8211; March 23, 2021 Beloved husband, father, brother, and friend, Scott Walters, 58, passed away peacefully at home on March 23. As was befitting to their life, his loving spouse was by his side. Scott delighted... View Obituary & Service Information

The family of Scott Allen Walters created this Life Tributes page to make it easy to share your memories.

Send flowers to the Walters family.