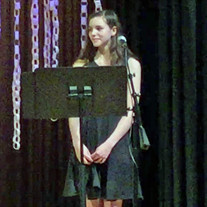 Sarah Rose Genari of Linden, VA tragically passed away suddenly on April 26, 2018 at the age of 16. She was born in Fairfax, VA on September 14, 2001. Sarah worked part time in the retail area of Cracker Barrel in Front Royal, VA. An artistically gifted young lady, she was a 4.0 honors student in her sophomore year at Warren County High School (Front Royal, VA), was recently selected for induction to the National Honor Society, and qualified for academic excellence awards in both her freshman and sophomore years. Sarah enjoyed helping others and pursuing her love of music through singing and teaching herself piano. She utilized her vocal skills to perform the National Anthem at various events and sang at local Christian women’s luncheons (both solo and with choir mate Erika Mirkay). Sarah was a section leader for the WCHS choir, and was elected to the office of vice president/treasurer by her peers. She represented WCHS in District Chorus, the Maroon Melodies glee group and PAVAN regional Governor’s School for performing arts. Sarah looked to her choir director Mrs. Beth Whitney and PAVAN’s Dr. Steve Jennings for inspiration, and as a result she embarked on a career path to become a music teacher in order to share her passion with others. Sarah also delved into acting as part of WCHS’ Maroon Masques theater troupe, under the direction of Mr. Chris Whitney. She participated as an ensemble player in "Cinderella," performed various roles in "Everything I Need To Know I Learned in Kindergarten," played Cinderella in "The Brothers Grimm Spectaculathon," and later portrayed Belva Collins in WCHS’ award winning production of "Anatomy of Gray." Sarah was very athletic and participated in multiple sports over the years such as little league baseball, girls’ softball, and represented Warren County Middle School in both 7th grade girls’ basketball and cheerleading. She also served as a WCHS JV baseball manager (along with longtime friend Isabelle Grupac) her freshman year, and more recently was a manager for the WCHS JV wrestling team. But her greatest love in the sports world was competitive swimming. As an 11 year member of the Prince William Swim League’s Dale City Frogs, Sarah won many awards and specialized in breaststroke. She could always be heard enthusiastically cheering on her teammates, and was a beloved mentor to younger swimmers. Sarah will be dearly missed by her family, friends, teammates and all whose lives she touched, especially with her gentle demeanor and beautiful voice. Sarah is predeceased by her paternal grandfather, John P. Genari. She is survived by her parents, Janet and Gino Genari of Linden, VA; siblings Rachel, Nicolas and Amanda Genari (and family pet Hershey) also of Linden, VA; maternal grandparents Peggy and Dennis Larman of Woodbridge, VA; paternal grandmother Patricia Fox of Waldorf, MD; as well as aunts, uncles and cousins. Arrangements are being handled by Pierce Funeral Home in Manassas, VA and are as follows: Visitation on Sunday, June 3, 2018 from 4:00-7:00pm Pierce Funeral Home 9609 Center Street Manassas, VA 20110 (703) 257-6028 Funeral Mass on Monday, June 4, 2018 beginning at 12:00pm St. Peter’s Catholic Church 12762 Lee Highway Washington, VA 22646 (540) 675-3432 While flowers are welcome, because the performing arts were so much a part of Sarah’s life, in lieu of flowers donations may be made to the following: Warren County High School Choral Dept. (or Theater Dept.) c/o Beth Whitney (or c/o Chris Whitney) 155 Westminster Drive Front Royal, VA 22630

Sarah Rose Genari of Linden, VA tragically passed away suddenly on April 26, 2018 at the age of 16. She was born in Fairfax, VA on September 14, 2001. Sarah worked part time in the retail area of Cracker Barrel in Front Royal, VA. An artistically... View Obituary & Service Information

The family of Sarah Rose Genari created this Life Tributes page to make it easy to share your memories.

Send flowers to the Genari family.