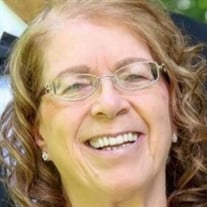 Sandra “Sandy” Francis (Chouinard) Watjen, 78, of Manassas,Virginia, passed away into the arms of Our Lord on Friday, January 21, 2022 in her home. Sandra was born on June 4, 1943 to Lawrence and Fernant Chouinard of Escanaba, Michigan. She attended Holy Name School. In the late 1960’s, she discerned with the Franciscan Sisters of Holy Family and, soon after departing the convent, met her husband of 52 years, David Watjen. David’s Air Force career brought Sandra and their growing family across the country until they eventually settled in Northern Virginia in 1980. Sandra is the 5th of 13 children. She is survived by her husband, David, and 7 children: Jemma Fasset, Michael (Sheila) Watjen, Anita (Jerred) Abbadini, Stephen (Firehiwot) Watjen, Anthony (Kimberley) Watjen, Timothy (Kierstyn) Schwartz-Watjen, Martin (Jessica) Watjen, 18 grandchildren, and siblings Robert (Cecilia) Chouinard, Dennis Chouinard, Jim Chouinard, Sharon (Don) Stangel, Raymond (Pam) Chouinard, Gary (Marcella) Chouinard Sr., Tom (Sue) Chouinard, Janice Roberts, Cherese (Pat) Sovey, and Terry Hudson. She is also survived by sister-in-law May Lee Watjen and brother-in-law John Watjen. She was preceded in death by her parents, Lawrence and Fernant (Bussineau) Chouinard Sr., her sister Mary Ann Gascon and her husband James, her brother Lawrence Chouinard Jr., and her brother-in-law Gerald Roberts. Sandra was also preceded in death by her granddaughter, Corinne. Sandra’s life was grounded i her family and her faith. Since the late 1980’s, she was an active member of Our Lady’s Missionaries of the Eucharist (OLME), a lay religious ministry focusing on the holiness of the laity. She was an active member of Sacred Heart Parish, in particular through her involvement with the Legion of Mary. She had a strong devotion to promoting the rosary. Sandra also had a green thumb, effortlessly caring for prolific houseplants including her beautiful African violets. She enjoyed crocheting, creative pursuits, puzzles, and games, in particular canasta. She was a devoted mother and grandmother, and a gracious hostess, offering warm hospitality to all. She was hard-working, humble, imaginative, and deeply cared about people around her. She will be dearly missed by all who knew her. The viewing and a rosary will be held from 6-8pm on Friday, January 28th at Pierce Funeral Home (9609 Center St., Manassas, VA 20110). A funeral Mass is scheduled for 11 am on January 29, 2022 at Sacred Heart Catholic Church in Manassas, VA. Following the funeral, the burial will take place at Sacred Heart cemetery (6430 Token Forest Drive, Manassas, VA 20112). A reception to follow at Sacred Heart Catholic Church.

Sandra &#8220;Sandy&#8221; Francis (Chouinard) Watjen, 78, of Manassas,Virginia, passed away into the arms of Our Lord on Friday, January 21, 2022 in her home. Sandra was born on June 4, 1943 to Lawrence and Fernant Chouinard of Escanaba, Michigan.... View Obituary & Service Information

The family of Sandra Francis Watjen created this Life Tributes page to make it easy to share your memories.

Send flowers to the Watjen family.