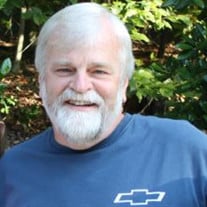 Samuel “Sam” Allen Posey Jr. was a loving husband, father, grandfather, brother and son. He left this world suddenly October 1, 2021, at the age of 62. Sam was born August 30, 1959, in Manassas, Virginia, to Samuel and Mildred Posey. Sam’s father passed away when he was a young boy, but he gained an admiring stepfather in Willie Lee Davis. In 1981, Sam married his childhood sweetheart, Laura. Together they had four children: Samuel, Christopher, Kimberly and Katelin. Sam and Laura spent over 40 years loving each other beyond measure, as no amount could truly define their devotion and happiness. Their love was the foundation of their family and a model for soulmates. Sam’s professional career was dedicated to hard work and providing for his family. He spent 40 years driving for J.F. Fick, Inc./Anheuser-Busch and was the epitome of resilience, never faltering to help those in need. Sam was an inspiration to others and always made for good conversation, especially if it involved his grandchildren. Although Sam was taken too soon, he left memories to forever cherish and love never to be forgotten. He was a kind and caring husband as well as an amazing father, with unmatched adoration and loyalty for both. His quick wit, eager smile and generous laugh were beacons among his family. Sam set a wonderful example for his children, who will continue to honor his legacy and ensure the days ahead are witness to his life well-lived. Sam is survived by his beloved wife, Laura; devoted sons, Samuel and Christopher; cherished daughters, Kimberly and Katelin; darling grandchildren, Macy, Audrey, Kylie, Chloe, Ryan, Isla, Mia, Elle, Easton, Samuel, Reese and Jackson; adoring mother, Mildred Davis; four siblings including his best friend and brother, Pete Posey. He is preceded by his father, Samuel Allen Posey Sr.; stepfather, Wille Lee Davis; and uncle, who he emulated, Doug Posey.

The family of Samuel Allen Posey Jr created this Life Tributes page to make it easy to share your memories.

Send flowers to the Posey family.