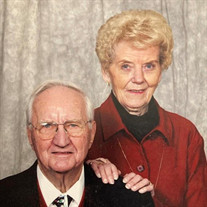 Samuel (Sam, Cookie) Tucker Dellinger, Jr (May 3, 1926 - March 15, 2021). Nokesville, VA. Sam was born in Columbia Furnace, VA and moved to Washington, DC in his teens with his family. He attended and graduated from Eastern High School in NE DC. While at Eastern, he excelled at basketball and was selected to the DC All-Met Team in 1944. Eastern won two city championships during his time there. For his accomplishments at Eastern, he was inducted into the Washington Jocks Hall of Fame in 1994. Like thousands of other American boys he enlisted in the Navy immediately after graduation to fight for his country during WWII. He was assigned to what is referred to today as a Fleet Replacement Squadron at Quonset Point Naval Air Station, R.I. While at Quonset NAS, he played on a basketball team that competed in the Eastern League, a precursor to today's NBA. After WWII ended, Sam was Honorably Discharged and moved back to DC, took a job with the Washington Gas Company and received a scholarship to play basketball for Georgetown University. While in DC,, he met Phyllis Ann Jagoditsch and entered into a lifelong marriage and they eventually settled in Vienna, VA. Together they raised four loving, wonderful children: Bobby (Barb), grandson Billy, granddaughter Brandi and great granddaughter Reagan; Cheryl Newgaard (Jimmy, deceased), grandson Chris Goedtel (Sarah) and great grandson Jackson; Donnie; and, Richard, grandsons Sam and Jamie. Sam was truly a family man. Sam and Phyllis were involved closely with all their childrens' activivities. Phyllis was considered a traditional wife/mother for that era (mid 50's - late 60's) and performed those duties. After graduating from Georgetown in 1950, Sam landed a full-time job with Melpar (later E-Systems and Raytheon) in Falls Church, VA and remained there until he retired in 1992. During that span, Sam helped his kids learn sports and taught them the values of teamwork and sportsmanship. He often assisted in coaching activities and occsionally would assume head coaching duties when requested and required. He also embarked on a couple of financial endeavors. He joined three other friends and bought rental property in Nags Head, NC, probably 2 or 3 years prior to NC property becoming very desireable. He also joined a group of seven other friends as the Treasurer in the Golf Trust Land Development Company. They bought a 300 acre farm in the little village of Greenwich near Gainesville, VA. They allocated 200 acres to build a golf course (100 acres for housing) that they named Greenwich Golf Course, which opened in 1968. Today, Prince William Golf Course is one of the most successful and profitable public courses in Northern Virginia. One of Sam's passions throughout life was his love of horse racing, which he passed down to his children. He nearly bought a horse one day but wisely settled for a bigger diamond for Phyllis. After retiring, Sam and Phyllis moved to Nokesville in 1992 in their Dream House built on the 12th hole of Prince William Golf course and lived there until their recent deaths. Sam was pre-deceased in death by his wife, Phyllis, of 74 years. He is survived by the aforementioned family members and many other family members and friends. A mass of Christian burial will be held at 10:30 AM on Tuesday, March 23, 2021, at Holy Trinity Catholic Church (8213 Linton Hall Road, Gainesville, Virginia 20155). Burial will follow at 1:30 PM at Cedar Hill Cemetery (4111 Pennsylvania Avenue, Suitland, Maryland 20746).

Samuel (Sam, Cookie) Tucker Dellinger, Jr (May 3, 1926 - March 15, 2021). Nokesville, VA. Sam was born in Columbia Furnace, VA and moved to Washington, DC in his teens with his family. He attended and graduated from Eastern High School in NE... View Obituary & Service Information

The family of Samuel Tucker Dellinger Jr created this Life Tributes page to make it easy to share your memories.

Send flowers to the Dellinger family.