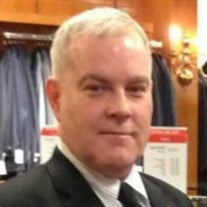 Samuel William Aylesworth, Jr, 57, of Arlington, VA passed away on Monday, March 7, 2022. He was born in Washington, D.C. to Samuel William and Marie Lawrence Aylesworth on September 22, 1964. He spent his entire life in Northern Virginia. He lived in Manassas, Virginia where he spent his childhood and moved to Arlington in the late 80’s. Sam was employed by Macy’s where he worked for the past 17 years and most recently was promoted to Business Manager at the Fair Oaks store. Sam believed that universal rights are inherent to us all, regardless of nationality, sex, national or ethnic origin, color, religion, language, or any other status. They range from the most fundamental – to those that make life worth living, such as the rights to food, education, work, health, and liberty. He had a strong faith in God and believed we were all called to help one another. He never preached it or shouted it but he quietly lived it. He provided housing to many homeless, food for the hungry, clothes to those who needed clothes and did many other acts of kindness. Sam loved vintage collectibles and antiques and travelled to Ohio, Pennsylvania, Maryland, West Virginia and the Shenandoah Valley to find his treasurers often accompanied by his mother, father and partner in life Yunier. Sam, Yunier and Sam’s mother would sell their wares at the Big DC Flea at the Dulles Expo Center in Chantilly, VA. Sam was a visual merchandising master and found much joy in setting up the space at the antique show. He received rave reviews and complements from the patrons of the show. He won several awards for his window displays in previous positions he held in retail Sam is survived by his father Samuel William Aylesworth and his mother Marie Lawrence Aylesworth of Manassas, VA; a sister, Cynthia Reedy of Manassas, VA, a brother, Timothy Aylesworth of Bealeton, VA, his partner, Yunier Castro Martinez of Arlington, VA, two nephews, Zachary Reedy of Manchester, CT and Jordan Reedy of Manassas, VA, a niece, Madeline Aylesworth of Gainesville, VA. He is also survived by many cousins, aunts and uncles. Friends will be received on Sunday, March 20 for a time of fellowship at 1:00 p.m. until 2:30 p.m. at Pierce Funeral Home in Manassas, VA. Service will immediately follow at 2:30 p.m. In lieu of flowers the family suggests that donations be made to The Walker Whitman Clinic in Washington, DC, the American Heart Association, Catholic Relief Services or a food bank in your area.

Samuel William Aylesworth, Jr, 57, of Arlington, VA passed away on Monday, March 7, 2022. He was born in Washington, D.C. to Samuel William and Marie Lawrence Aylesworth on September 22, 1964. He spent his entire life in Northern Virginia. He... View Obituary & Service Information

The family of Samuel William Aylesworth Jr created this Life Tributes page to make it easy to share your memories.

Send flowers to the Aylesworth family.