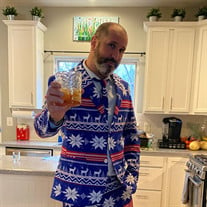 Ryan Angelo Amato, 40 of Manassas, Virginia passed away unexpectedly on June 19, 2021. Ryan was born in Fairfax, VA on June 25, 1980 to Robert and Linda Amato. Ryan was a devoted husband to Erin, an adoring father and step father to Liam, Carter, Ireland and Mallory, as well as a devoted son, brother and friend. He loved those closest to him with a fierce and loyal passion. He was deeply proud of his service to this country in the United States Navy. He was inspired by music and could play multiple instruments, and his voice was incredibly soulful and soothing. Ryan had performed in bands since high school, most recently with a local band, For the Win, which included his best friend of 31 years, Bill Ledbetter. His stage presence was captivating and his energy was electric. Ryan loved spending his free time with his family. Friday family movie nights with all of the kids were his favorite, along with quiet nights in his new home with his wife, a cocktail and great conversation, listening to yacht rock, fire pitting, watching jeopardy and creating music. He loved vacationing in the Outer Banks with his family, and loved his occasional get-away weekends to the mountains with his wife, to relax and unwind. He was so excited to take his Erin to Hawaii for their honeymoon, so she could experience his favorite place on earth. The world shines a little less bright without him in it but his memory continues to live on in the hearts of the lives he touched during his all too short life with us. He is survived by his loving wife, Erin, his amazing sons Liam and Carter and his beautiful step daughters Ireland and Mallory. He is also survived by his mother, Linda Amato, and brothers Jahn, Steve and Rob. He is proceeded in death by his father, Robert Amato. A Celebration of Ryan’s life will be held on July 2, 2021 at 2 pm at Pierce Funeral Home, 9609 Center Street, Manassas, Va 20110. A gathering will immediately follow in the Pierce reception hall. In lieu of flowers, a trust fund is being set up for Liam and Carter. Information on how to donate will be updated here shortly.

Ryan Angelo Amato, 40 of Manassas, Virginia passed away unexpectedly on June 19, 2021. Ryan was born in Fairfax, VA on June 25, 1980 to Robert and Linda Amato. Ryan was a devoted husband to Erin, an adoring father and step father to Liam,... View Obituary & Service Information

The family of Ryan Angelo Amato created this Life Tributes page to make it easy to share your memories.

Send flowers to the Amato family.