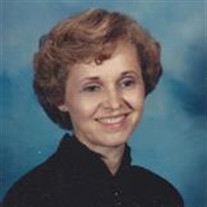 Ruth Tucker Marcey, age 85, of Haymarket, Virginia, passed away on Sunday, December 12, 2021, from complications due to pneumonia at UVA Prince William Medical Center in Manassas, Virginia. Ruth was born on November 4, 1936, in Champaign, Illinois, to the late Howard Lowell Tucker and the late Velva (Estes) Tucker. She was also predeceased by her beloved husband of 61 years, Gerald (Jerry) L. Marcey, sister Mary Lois Plaster, brother Lowell Tucker Jr., and son-in-law James Dunseath, Jr. Survivors include her two children, Terri Dunseath and Brian Marcey, one grandson, James (Jimmy) Dunseath III, all of Haymarket, Virginia, and sister-in-law Bonnie Lowry of Greencastle, Indiana, and many extended family members. Ruth and her family moved from Illinois to Norfolk, Virginia, when she was very young. She graduated from Norview High School in Norfolk and attended Lynchburg College in Lynchburg, Virginia, where she met her future husband, Jerry. They were married less than a year later. She lived in Northern Virginia all her married life. In 1968 Ruth began her career with Fairfax County Public Schools. Over the next thirty years she taught kindergarten and first and second grades at Annandale Terrace Elementary, Kings Park Elementary, and Bonnie Brae Elementary. Prior to that, she taught at Flint Hint Preparatory School and Wallingford School. She retired in 1998. In 2011, she distinguished herself by saving her husband Jerry's life when he suffered an at-home cardiac arrest. Her presence of mind enabled her to call emergency services and to perform CPR while awaiting their arrival. This selfless act helped give Jerry an additional nine years of life that he would not have had otherwise. Ruth participated in various recreational activities, including travel. She drove cross-country to California and traveled to Hawaii and Europe. After her retirement, Ruth and Jerry enjoyed going on cruises, including one through the Panama Canal in 2005. She enjoyed taking walks on the beach and playing card games with friends. She loved extending hospitality to others and was thoughtful with her cards and kind words. She was a master at crossword puzzles and Sudoku. She loved shopping and was a collector of many things. One of Ruth's greatest passions was for clothes. Everyone who knew her noticed how she was always well-dressed which was a point of pride for her late husband, Jerry. Ruth was fun-loving and had a great sense of humor and a quiet grace and demeanor. She will be greatly missed. The family will receive friends and family on Saturday, April 23, 2022, from 10:00 am - 11:00 am, at Pierce Funeral Home, 9609 Center Street, Manassas, Virginia. A memorial service will begin at 11:00 am.

The family of Ruth Tucker Marcey created this Life Tributes page to make it easy to share your memories.

Send flowers to the Marcey family.