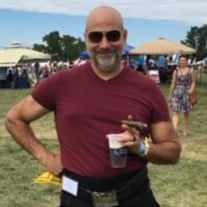 “One good person can touch more hearts than we’ll ever know” The world lost a bright light at Ruben’s passing. He was a presence, with a passion for life that made an immediate and lasting impact on everyone he met. His loyalty and work ethic were unmatched, and he encouraged and expected the same from those around him. Ruben was an incredibly talented artist, evident in his superior work in proposal graphics, his beautiful home and his creation of Fuggly Mugs, which, according to Ruben, were inspired by his view in the mirror each morning. Deeply feeling Ruben’s loss are his loving wife and best friend, Amy, his devoted daughter and the apple of his eye, Tracy, as well as his stepchildren Emily, Drew and Will Quinlan who were inspired and grateful for his love for their mother. An extraordinary and unbreakable bond exists between Ruben’s mother, Sila Esperanza Navarro and siblings, Marco Fernandez, Carmen Rafael (Magda), and Mario Fernandez (Hyun Jeong) and his son, Troy. He adored his niece, Tiffanie Rafael (Manny) and “nefs” Eddy Rafael (Jesse), Michael Rafael (Giselle) and Andy Rafael as well as Shaun and Bobby Rafael and their families. They will all remember Ruben as an integral part of their childhood as well as a friend and mentor in their adult years. Ruben was preceded in death by his father, Marco Aurelio Fernandez. Also missing their “alpha” is Ruben’s pack, Hana, Bo, Simon and Bridget. We know his beloved Moki was waiting for him on the other side. Should you wish, please honor their mutual devotion with a donation to the American Society for the Prevention of Cruelty to Animals at www.aspca.org. A private celebration of Ruben’s life will be held at a later date.

&#8220;One good person can touch more hearts than we&#8217;ll ever know&#8221; The world lost a bright light at Ruben&#8217;s passing. He was a presence, with a passion for life that made an immediate and lasting impact on everyone he met.... View Obituary & Service Information

The family of Ruben Fernandez created this Life Tributes page to make it easy to share your memories.

“One good person can touch more hearts than we’ll ever know”
The...

Send flowers to the Fernandez family.