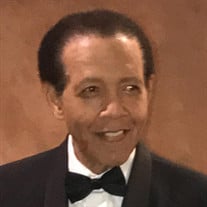 John 3:16 For God so loved the world, that He gave His only begotten Son, that whosoever believeth in Him should not perish, but have everlasting life. Ronald (Ron) Eliot McIlwain was born August 23, 1943, in Washington, D.C., to the late Ivy McIlwain, inventor and the late Dr. Clara Evans McIlwain, agricultural economist, author, Steps To Eloquence With The Word Of God©. Four children were born from this union; Ron was their first born. He has three sisters whom he protected. They called him “Hoss”! He was reared in Washington, D.C., attended Roosevelt High School, and a member of the singing group, “The Hot Tamales”. He played football at Laurinburg Institute and Clark Atlanta University. Drawn more to the entertainment industry, Ron relocated to California where he was blessed to secure acting parts on the “Bob Newhart Show”, “The Long Goodbye”, “Mixed Company” movies, including commercials. He was also a major investor in the nationally-acclaimed play, Harlem Suites, which originated in Washington, DC. He loved The Arts. Ron's father requested that he return home to assist with his inventions. Ron was the CEO and Founder of FilterSure, Inc., with a vision of clean water for the planet with the water filtration system invented by his father. Ron was a man of faith! No matter the condition or situation, he kept the faith! This is pleasing to God. (Hebrews 11:6 But without faith, it is impossible to please him; ...) He was also the family comedian who told many corny jokes and kept his mother laughing! Ron is survived by his sisters, Evangelist Dr. Carol McIlwain Edwards, author, Reading With Jesus™ - You Can Teach Your 4 or 5 Year Old Child To Read In 90 Days©; Professor Marilyn Ross-Moody, School Administrator; Mrs. Ivy Jean Lindsay, Realtor and Notary. In addition, he is survived by his nieces and nephews, Mrs. Celeste Ross-Barry, Mrs. Leigh Ann Penn, Mr. Wayne Michael McIlwain Lindsay, Mr. Elon Molina, Mrs. Tai White-Johnson, Miss Audrianna Harris, Miss L'Tisha Murray, Miss Tierra Drewry, Mr. Wendell Burgess, Mr. Fred D.C. Ross, III, Miss Alexis Habie Barry, and Miss Lillian Carol Penn. The extended family includes brother-in-law, Mr. Willie F. Lindsay; brother-in-law, Mr. Peter Allen Moody; nephew-in-law, Mr, Alpha Barry and nephew-in-law, Mr. Jarrett Wayne Penn.

John 3:16 For God so loved the world, that He gave His only begotten Son, that whosoever believeth in Him should not perish, but have everlasting life. Ronald (Ron) Eliot McIlwain was born August 23, 1943, in Washington, D.C., to the late... View Obituary & Service Information

The family of Ronald Eliot McIlwain created this Life Tributes page to make it easy to share your memories.

Send flowers to the McIlwain family.