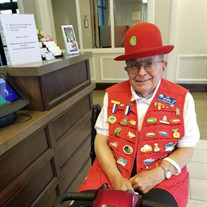 Robert C. Kirk (85) of Gainesville, VA passed away Monday June 28, 2021. Bob was born in 1936 in New York City. He was the son of Edward and Elvira Kirk. Bob is survived by his wife of 20 years, Barbara; daughters Cynthia Kirk (Jim Ross) and Katherine Seager and stepdaughters Jacqueline Dunn and Rosanne Legard (Robert) He had three grandchildren; Leah Seager, Jonathan Seager and Colleen Seager; two step-grandchildren, Jennifer Mortzfield (Corey) and Hope Legard; and two step-great grandchildren, Travis and Callie Mortzfield. He was preceded in death by his first wife of 42 years, Dottie Kirk. Many of his early years were spent in Bellmore, NY on Long Island. After leaving high school Bob joined the Air Force and traveled the world, retiring after 20 years. Some of Bob's assignment locations included Texas, Iceland, Mitchel AFB NY, Eglin AFB FL, France, Vietnam, Langley AFB VA, Bolling AFB DC and the Pentagon. While at the Pentagon Bob supported the Joint Chiefs of Staff in security. After retirement Bob worked for several companies. He eventually returned to the security field at MITRE Corporation before retiring for a second time in 1998. Bob was an active member of Gainesville United Methodist Church. He was a member of Evergreen Volunteer Fire Department and Rescue Squad for over 20 years participating in the Auxiliary and Canteen. He was a Life Member of the Lions, a progressive Melvin Jones Fellows and a long-term member (and Past President) of the Park-West Lions Club, where his many volunteer activities included setting up appointments for the Sight and Hearing screening Van and the Northern Virginia Lions Youth Camp, collecting eyeglasses and arranging eye doctor appointments for those in need. Bob was loved and respected by all who knew him. He loved serving his church, community and country and will be missed by many. Bob loved to travel, attending numerous Lions conventions and was always ready to cruise anywhere anytime. he was a devoted fan of the Washington Footballl Team and NASCAR. In lieu of flowers donations can be made to the Park-West Lions Club, 8620 Sunnygate Drive, Manassas, VA 20110 or Gainesville United Methodist Church, 13710 Milestone Ct., Gainesville, VA 20155. Visitation will be at Pierce Funeral Home, Manassas, VA on Tuesday July 6, 2021 from 6:00-8:00 PM. There will be a Lion's Memorial Service at 7:00 PM. The funeral service will be Wednesday July 7, 2021 at 11:00 am at Gainesville United Methodist Church, Gainesville, VA A private burial will be at Quantico National Cemetery on Monday July 12, 2021. --

Robert C. Kirk (85) of Gainesville, VA passed away Monday June 28, 2021. Bob was born in 1936 in New York City. He was the son of Edward and Elvira Kirk. Bob is survived by his wife of 20 years, Barbara; daughters Cynthia Kirk (Jim Ross) and... View Obituary & Service Information

The family of Robert C. Kirk created this Life Tributes page to make it easy to share your memories.

Send flowers to the Kirk family.