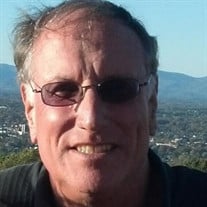 Robert N. “Ron” Kelley, age 70, of Gainesville, Virginia, died on April 23, 2020. He was born and raised in North Plainfield, NJ, "Ron" received many awards in high school for his athletic achievements, first team all-county in football, two-year county and mid-state pole vault champion, placing fourth in the state competition After high school, Bob "Kell" went to Gettysburg College and subsequently obtained his master's degree in business administration from Rutgers University After graduation, he began a 30-year career at New Jersey Bell/ Verizon, holding regulatory positions as well as Director of Operations, finance. He moved to Centreville, VA in 1993, then relocated to Heritage Hunt and retired from Verizon in 2003. Bob remained active, enjoying his grandchildren, driving cars with his buddies at Adesa, golf, concert committee, skiing, the pool, Rutgers, Giant and Yankee games and travel. He is survived by his wife, Deborah; two sons, Douglas and his wife, Lynn, of Arlington, VA and their two children, Grant and Colin and Gregory of West Springfield and this three children, Clara, Nora and Evelyn; a sister, Cheryl and her husband, Dr. Allen Crawford, and son, Spencer, of Macungie, PA. Family will receive friends on Friday, May 7, 2021 from 2:00 PM to 4:00 PM and from 6:00 PM to 8:00 PM at Pierce Funeral Home and Cremation Services, 9609 Center St., Manassas, VA. A Celebration of Life will be held at a later date. In lieu of flowers, the family is requesting contributions be made to Amyloidosis center, Boston Medical center, in his memory are welcomed.

The family of Robert N. Kelley created this Life Tributes page to make it easy to share your memories.

Send flowers to the Kelley family.