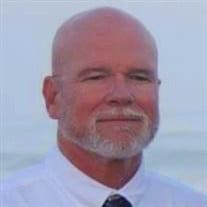 Beloved father, American soldier and devoted husband Robert Bruce Graham, 59, passed away February 14, 2022 with his wife by his side after a courageous battle with Alzheimer’s disease. Even though a failing mind took him away from this earthly world too soon, his loving heart leaves a beacon of light behind in his beloved family. He was born in Fort Sill, OK to parents Bob and Diana and moved around with his military family, finally settling in Fairfax, VA. He graduated from Robinson High School in 1980 and then went on to George Mason University. In 1980, Bruce enlisted in the Army and eventually transferred to the Army National Guard. He honorably served for over 34 years, and completed multiple deployments, including Kuwait and Iraq retiring in 2014. He earned many distinguished medals including the Bronze star and was proud to serve his country. Bruce also loved Marvel comics, he loved to read and watch science fiction, carve walking sticks, going to museums and spending time with his family. Bruce is survived by his best friend and dedicated wife of over 36 years, Kathryn Pope-Graham, whom he met in 1982 while they were both working at Italian Delight in Fairfax, VA. He was the proud father to four children, Victoria (fiancé, Sarah) of Leesburg, VA, Collin of Oakton, VA, Grace & Liam of the family home in Gainesville, VA, his parents Bob and Diana Graham of Gig Harbor, WA, sister Kathleen Jung (husband Mike and 3 daughters Shannon, Kelly, and Molly) of Ridgefield, WA, sister Robin Lynn, (boyfriend Bill and 2 children Heather and Ian) of Centreville, VA, and brother James Graham (wife Lacie and 3 children Nolan, Owen, and Lauren) of Gig Harbor, WA. Catholic mass will be held at Holy Trinity Catholic Church, (8213 Linton Hall Rd) in Gainesville, VA on Saturday March 5, 2022 at 2pm, a reception to follow at the church. Graveside burial will be at Arlington National Cemetery at a later yet undetermined date.

Beloved father, American soldier and devoted husband Robert Bruce Graham, 59, passed away February 14, 2022 with his wife by his side after a courageous battle with Alzheimer&#8217;s disease. Even though a failing mind took him away from this... View Obituary & Service Information

The family of Robert Bruce Graham II created this Life Tributes page to make it easy to share your memories.

Send flowers to the Graham family.