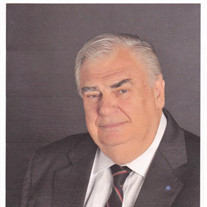 Robert Charles “Bob” Goessman of Manassas, Virginia passed away on Wednesday, February 17, 2021 at Prince William Hospital with family by his side. He was born July 25, 1934 in Brooklyn, New York where he graduated from Brooklyn Collegiate and Polytechnic Institute and Adelphi University with degrees in Electrical Engineering and Physics. While living in Brooklyn he met and married the love of his life Adrienne Wright in 1955. Bob enlisted in the United Stated Air Force in 1953. He was stationed in England until 1957 and was immensely proud of his military service. Subsequently, Bob was employed by Sperry-Grumman and eventually went to work for the International Business Machines corporation which brought him and his family to Manassas, Virginia in 1970. Bob worked for IBM for more than 30 years, retiring in 1991. Bob and his family were members of All Saints Catholic Church in Manassas. Bob also lived in Warrenton, VA where he was a member of St. John’s Catholic Church. Bob was a life-long train and model train enthusiast and world traveler. He enjoyed music, particularly The Four Freshmen and attended many of their yearly conferences. He loved to read, especially Sherlock Holmes mysteries and historical novels. Bob was a volunteer with SERVE, Inc., CASA, and United Way. Bob loved his family and grandkids and was always present at their events. Bob had many friends and did his best to enjoy every day. Bob was the son of the late Charles and Edna (nee Dondero) Goessman of Brooklyn, New York. He is preceded in death by his wife of 30 years. Survivors include his four daughters: Caryn Wells (David) of New Canaan, CT; Suzanne Mitchell (Curtis) of Gainesville, VA; JoAnn Polen (David) of Manassas, VA; and Laurie Crawford (Carl) Warrenton, VA. Bob was affectionately known as Pop to his nine grandchildren: Morgan Bjerke (Ben); Kelsey Mitchell; Mark Polen; Melissa Polen; Shannon Mitchell; Rachel Crawford; Jason Crawford; Christopher Wells and Adrienne Wells, and one great-grandson, Jack Bjerke. He also leaves behind his cousin, Henry John Dondero of Glen Cove, NY; his brother-in law, Edward Wright of Orient Point, NY and 10 nieces and nephews. Due to Covid-19 restrictions, a private viewing and funeral service will be held on Tuesday, February 23, 2021 from (11:00am- 11:30 am) for family and relatives at Pierce Funeral Home. For those that would like to attend the funeral virtually from (11 - 11:30 am) please go to Obituaries | Pierce Funeral Home - Manassas, VA (piercefh.com) Under Bob’s obituary and videos you will be able to live stream the service. Interment is open to family and friends at Stonewall Memory Gardens in Manassas, VA and will be held at 12:00 pm. In lieu of flowers, donations may be made to the Dementia Society: www.dementiasociety.org or the American Cancer Society www.cancer.org Condolences may be sent to www.piercefh.com.

Robert Charles &#8220;Bob&#8221; Goessman of Manassas, Virginia passed away on Wednesday, February 17, 2021 at Prince William Hospital with family by his side. He was born July 25, 1934 in Brooklyn, New York where he graduated from Brooklyn... View Obituary & Service Information

The family of Robert Charles Goessman created this Life Tributes page to make it easy to share your memories.

Send flowers to the Goessman family.