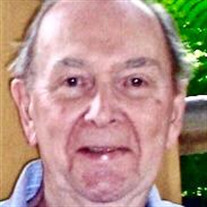 Robert Peebles Fulton (Bob), of Gainesville Virginia, died on January 2nd 2021. He was 92 years old. Bob was born and raised in Queens, NY, to Margaret Peebles and James Fulton and who immigrated to the US from Scotland. After graduating from Brooklyn Technical High he enlisted in the Army where he served pre-war occupational duty in Korea, guarding onboard trains. Once his tour of duty ended he enrolled for college with GI benefits and graduated from Polytechnic Institute of Brooklyn, with a Mechanical Engineering degree, in 1951. Upon graduation from university Bob commenced his career in naval engineering by joining the New York naval architecture firm Gibbs and Cox. He previously had a summer job with this firm in the mailroom, during high school. At the firm he advanced to supervisory roles responsible for areas including technical specification of propulsion systems for Navy destroyers and management in the Machinery Division. Bob left Gibbs and Cox in 1971 to become President of Modular Systems, Parsippany, NJ, which he led until 1974. He then rejoined Gibbs and Cox and was soon appointed Vice President to run their Washington DC division that engaged in engineering studies for various government clients including the US Navy, Coast Guard, and Army Corp of Engineers. He retired in 1989. Bob was a member of the Society of Naval Architects and Marine Engineers, and the American Society of Naval Engineers, serving on numerous committees and regional positions for both. He volunteered in retirement at Fairfax Opportunities, a non-profit, that provided support and employment opportunities for individuals with disabilities. Robert Fulton married Emily Ambrosio in 1954. They raised their family in Long Island, NY and New Jersey before work relocated the empty nesters to Annandale Virginia. In New York, Bob was elected to the School Board of North Shore Schools and served from 1963-1969. In retirement they built a home at Lake Anna, VA, which was a gathering place for friends and family for many years. Bob was an avid woodworker. Every home they lived in had a shop and he followed in his father’s footsteps making furniture and other creative wood projects. They enjoyed national and international travel with friends and family. Later they moved to Heritage Hunt, Gainesville, VA where they formed lasting friendships with their new neighbors. They were married for 66 years. Bob was predeceased by his wife Emily; his daughter Claudia; grandson Clark; brothers William and James. He is survived by his son Paul and wife Audrey; one grandchild; and one great-grandchild. Interment and a memorial service at Arlington National Cemetery are planned for a future date, to be announced. Memorial donations in lieu of flowers can be made to Covenant House, New York, which Robert and Emily supported for many years.

Robert Peebles Fulton (Bob), of Gainesville Virginia, died on January 2nd 2021. He was 92 years old. Bob was born and raised in Queens, NY, to Margaret Peebles and James Fulton and who immigrated to the US from Scotland. After graduating... View Obituary & Service Information

The family of Robert P. Fulton created this Life Tributes page to make it easy to share your memories.

Send flowers to the Fulton family.