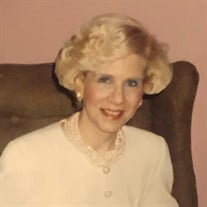 Rita Gibson Koman, 85, died peacefully on March 10, 2022. A native of St. Louis, Missouri suburbs, Rita was the eldest of four daughters to Roy and Marion Gibson. She was married for 56 years to Joseph J. Koman, Jr. who preceded her in death. For their entire married life, Rita and Joe lived and raised their family in Manassas. She is survived by her four children and their spouses: Joseph Koman III (Jay), David Koman and his wife, Bistra, Julia Riddlemoser and her husband, Patrick, and Amanda Koman. She has four grandchildren: Francesca Riddlemoser, Gabrielle Riddlemoser, Sophia Koman, and Caterina Koman. She is also survived by her sister, Rosalie Duke and her husband, Harold, and her many nieces and nephews. Rita graduated from Coe College in 1958 and obtained her Masters degree from the University of Maryland, College Park in 1961. She had a lifetime drive for learning and a dedication to education, which led her to teaching. This was her passion. Rita wanted to share her knowledge not only with her students, but with the community. She taught history and government at the high school and community college level for twenty years; 13 of those years at Osbourn High School. She enjoyed teaching her students and preparing them for success in their college years. Rita was active in preserving the history of Manassas as an early member of the Manassas Museum Associates and received a Honorary Lifetime Member of the Historic Resources Board for the Manassas Museum recognition from the city. She worked diligently on behalf of the Museum Board, she volunteered with a variety of their academic programs, and she supported the construction of the museum itself. Finally, she wrote Manassas Mosaic: Creating a Community which commemorates the history of the city of Manassas. Rita taught religious education classes at All Saints Catholic Church where her family were parishioners since 1963. She also wrote a history of the parish entitled, United Together, All Saints, All People of God Celebrating 125 Years 1879-2004. Rita was active in her history teacher chapters of the Virginia Foundation for Women, and Virginia’s State Executive Board of Delta Kappa Gamma International. She was active in her national sorority Kappa Delta. She was a voracious reader, loved to travel to historical landmarks and sites all across the country with her husband, and enjoyed spending time with her grandchildren. Rita will be remembered for her love of history, her contagious smile, and her thirst for learning. A viewing will be held on Tuesday, March 15, 2022 at Pierce Funeral Home, from 7 to 9 pm. A Funeral Mass will be held at All Saints Catholic Church at 10 am on Wednesday, March 16, 2022. The family would like to thank the nurses, aides, and staff at Manassas Health and Rehab Center who lovingly cared for our Mother during her stay with them. We are eternally grateful. In lieu of flowers, a donation can be made to the Alzheimer’s Association, alz.org.

Rita Gibson Koman, 85, died peacefully on March 10, 2022. A native of St. Louis, Missouri suburbs, Rita was the eldest of four daughters to Roy and Marion Gibson. She was married for 56 years to Joseph J. Koman, Jr. who preceded her in death.... View Obituary & Service Information

The family of Rita Gibson Koman created this Life Tributes page to make it easy to share your memories.

Send flowers to the Koman family.