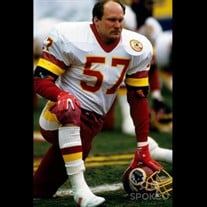 Richard “Rich” Paul Milot, 64, of Haymarket, Virginia, passed away on August 13, 2021. Rich was born on May 28, 1957, in Coaldale, Pennsylvania, to John and Anita (Theresa) Milot. Rich grew up in Brockton and Pittsburgh, Pennsylvania and loved spending time in the beautiful outdoors and getting into mischief. He was an incredible athlete from a young age, and he chose to focus on Football and Track & Field in high school. A force to be reckoned with in Track, he smashed multiple records at Moon Township High School and specialized in the 330-yard intermediate hurdles, but his offensive and defensive football prowess drew attention from NCAA D1 football powerhouses nationally. He was recruited by Joe Paterno and ultimately joined Pennsylvania State University’s football program in 1975 as a running back. At Penn State, Rich transitioned from running back to the Hero linebacker position during his junior year. He finished his senior year with three interceptions, including one in the 1979 Sugar Bowl versus the #2 Alabama Crimson Tide. He was drafted as a 7th round pick by the Washington Redskins from Penn State in the 1979 draft and is recognized by many as the best seventh-round pick in franchise history. Rich spent nine years in the NFL with the Washington Redskins as a linebacker, appearing in three Super Bowls and winning two Championships in 1983 and 1988. A key member of the Joe Gibbs era franchise, Rich played in 121 NFL games for the ‘Skins and started in 91 of them after winning the starting job in his rookie year. Rich still holds the club’s post-season record of 3.5 sacks in a game, which he achieved vs. the Bears in 1984. He retired from the Redskins after Super Bowl XXII in the 1987 season. During the off seasons of his NFL career, Rich worked for the Sandoz pharmaceutical office in Washington, DC. In his role, he worked on the staff of Utah Senator Orrin Hatch where he attended political hearings and met with congressional staff. Always a good student, Rich put his math skills to work following his retirement from the NFL and worked as a Senior Tax Advisor at H&R Block in Manassas, Virginia. Rich will be remembered as an incredible father, friend, and significant other. He fiercely loved his two daughters and wanted them to achieve their dreams. Rich was so proud when they both went to the University of Virginia for undergraduate studies. He was their biggest cheerleader at their track & field, cross country, and soccer events in high school and college. He also loved bringing them to Penn State football games to tailgate with his former Nittany Lion teammates. Rich was humble despite his incredible achievements and had the ability to light up a room with his hilarious jokes and stories. In addition to spending time with his two daughters, he loved spending time with his girlfriend, her family, and his friends. He adored all animals, especially his two dogs, who he could be seen driving around Haymarket daily. Rich enjoyed golf, debates (especially about politics), meticulously maintaining his lawn, McDonald’s Diet Cokes, and the occasional Dewar’s with friends. Rich is survived by his children, Kristin and Courtney Milot; life partner Kimberly Lincoln and her children Stephen and Brooke Lincoln; and brothers Ronald Milot (wife, Lori) and John Milot (wife, Patricia). He was pre-deceased by his mother, Theresa Milot, and father, John Milot. A celebration of life will be held for Rich on Thursday, August 26, 2021, from 4:00-6:00 PM ET at Stonewall Golf Club, 15601 Turtle Point Dr, Gainesville, Virginia, 20155. Rich’s family warmly encourages all attending to wear Penn State and Redskins colors in celebration of his football career. In lieu of flowers, donations may be made in loving memory of Richard “Rich” Milot by mail to ALSAC/St. Jude Children's Research Hospital 501 St. Jude Place Memphis, TN 38105 or online at stjude.org or https://www.stjude.org/donate/donate-to-st-jude.html?sc_icid=wtg-mm-btn-donate-now Condolences may be sent to www.piercefh.com

The family of Richard "Rich" Paul Milot created this Life Tributes page to make it easy to share your memories.

Send flowers to the Milot family.