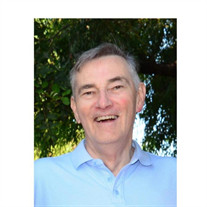 Richard John Noble went home to be with the Lord on Wednesday, December 30, 2020, in Aldie, Virginia. Born on October 16, 1941, in Joliet, IL, to Thomas Miller and Ruth (Hicks) Casselman, he was adopted by Veryl and Doris Noble and raised by Emily Babcock. After having lived all over the United States, Rich settled in Oakton, Virginia, with his wife and daughters in 1985. He received his Bachelor’s degree in Business from Park College in 1987. He began his career with the U.S. Air Force and then spent 30 years working as a Civil Service professional. The highlight of his career was working as a Budget Analyst for the Department of Defense at the Pentagon. Throughout his youth, the only thing that Rich prayed for was a family. God answered that prayer when he was fed a piece of chocolate by a beautiful, young alto named Jan after a high school Madrigal concert. They married three years later. Thankfully, a loving neighbor introduced Rich and Jan to the love of their Heavenly Father, something Rich had yearned for his entire life. During their 58 years of marriage, they were blessed with five children, then five children-in-law and a bevy of grandchildren and great-grandchildren. Rich was passionate about his God, his family, his country, the Cubs, rollercoasters, and music. Favorite memories include annual pilgrimages to major baseball parks in the U.S. with his boys, any visit to amusement parks and trips to national landmarks. After raising their five children, Rich and Jan enjoyed traveling the U.S. and the highlight of their journeys included two visits to Israel and Rwanda. Generous with his finances, wisdom, and laughter, he loved nothing more than enjoying a good cup of coffee, an incredible meal and a decadent dessert surrounded by his loving wife and the amazing blessing of family. As a family, we will always be grateful for the loving and tender way in which Rich cared for Jan during her long 10-year battle with Parkinson’s and dementia, in the midst of his own health struggles. The Noble family rejoices knowing that Rich and Jan are together again, well and restored, worshipping their Savior side by side. He is survived by sons Scott (Chrissy) and Brian (Jackie), daughters Beth (Darren), Kristen (Scott) and Anita (Shawn), 13 grandchildren and their spouses and 11 great-grandchildren. Memorial donations in memory of Rich can be made to Jubilee Christian Center, Missionary Ventures, International, and World Vision at: Jubilee Christian Center Missionary Ventures, Intl World Vision P.O. Box 400 1017 Maitland Center Commons P.O. Box 9716 Fairfax, VA 22038 Maitland, FL 32751-7205 Federal Way, WA 98063 Designation: Matt & Amanda House www.jccag.org www.mvi.org www.worldvision.org

Richard John Noble went home to be with the Lord on Wednesday, December 30, 2020, in Aldie, Virginia. Born on October 16, 1941, in Joliet, IL, to Thomas Miller and Ruth (Hicks) Casselman, he was adopted by Veryl and Doris Noble and raised by... View Obituary & Service Information

The family of Richard John Noble created this Life Tributes page to make it easy to share your memories.

Richard John Noble went home to be with the Lord on Wednesday,...

Send flowers to the Noble family.