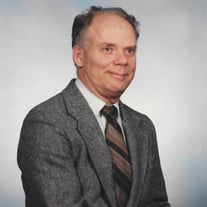 Richard Kent Farnsworth died February 6, 2022 at the age of 87 after a short illness. Dick was born to Burton Kent and Mabel Purnecy Pearce Farnsworth in Salt Lake City, Utah. He was the youngest of six children, and the only one to be born in a hospital. He attended school there. He was called to the Central American Mission of the Church of Jesus Christ of Latter-day Saints and served in Guatemala and El Salvador. Upon his return, he met and married Wilma Anne Ling of Filer, Idaho in the Salt Lake Temple. He graduated with a Bachelor’s degree from the University of Utah and then served for two years in the US army artillery in Fort Sill, OK, rising to the rank of Captain. After leaving the army, he went to Brigham Young University and earned a Master’s degree in Physics. After graduation, Dick took a position with the US government in Washington, DC. Dick and Wilma expected to be in the area for two years, but they have lived in Virginia ever since. They became the parents of four children, Laura, Becky, Bill, and Ruthann. Dick spent most of his career with the National Weather Service—as a flood forecaster for NOAA. He went back to school mid-career, and in 1972, he was awarded a PhD in Remote Sensing from the University of Michigan. He served in many positions with the Church of Jesus Christ of Latter-day Saints including president of the Mekong Branch, seminary teacher, stake executive secretary, and faithful home teacher. In 1995, Dick and Wilma served a one year mission in McAllen, TX. Upon their return, Dick was called as a sealer in the Washington D.C. Temple, a calling he loved and served in until the temple closed for renovation. Dick is survived by his wife, Wilma, his children Laura Nielsen (Ralph) of Hyrum, UT, Becky Evans (JD) of Springfield, VA, Bill Farnsworth (Jeannie) of Fairfax, VA, and Ruthann Harne (Mark) of Greencastle, PA, 12 grandchildren and 6 step-grandchildren, 7 great-grandchildren and 27 step-great-grandchildren, his sister Patty Linn Tolley, and his brother Robert Farnsworth. He was predeceased by his parents and siblings Lucile Hales, Dean Farnsworth, and Margaret Richards. The funeral will be held on Monday, February 14 at 11AM at the Burke Ward Chapel at 6942 Sydenstricker Road, Springfield, Virginia 22152 with family visitation at 10AM. The funeral can be watched remotely at https://zoom.us/j/96944509980

Richard Kent Farnsworth died February 6, 2022 at the age of 87 after a short illness. Dick was born to Burton Kent and Mabel Purnecy Pearce Farnsworth in Salt Lake City, Utah. He was the youngest of six children, and the only one to be born... View Obituary & Service Information

The family of Richard Kent Farnsworth created this Life Tributes page to make it easy to share your memories.

Send flowers to the Farnsworth family.