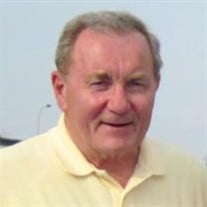 Richard Alan Buckner, “Buck” of Gainesville, Virginia passed away on July 22, 2021 at the age of 81. He is survived by his wife of 60 years, Patricia (Trish), his daughter Elizabeth Buckner-Yordy (Chris), son, Rich Jr., and daughter Ann Marie Stulik (Ken), grandchildren Stephen, Allison, Amanda, Tori, Morgan, Lauren, Alexander, Tyler, Nicole, Clare and Eli and 6 great grandchildren and another on the way. He is also survived by his younger brother LTC (ret) Roy Charles Buckner, of St. Augustine, Florida. Buck was born on 2 November 1939 to Lawrence and Elizabeth Buckner of the Bronx in New York City. Buck’s father passed away at a young age and he and his brothers, Bob and Roy, were raised by their mother. All three brothers graduated from the United States Military Academy in West Point, New York. While at West Point, Buck played intercollegiate football and lacrosse. After the 1961 lacrosse season, he was selected as a first team All-American defenseman. Upon graduating in 1961, Buck married Trish, his high school sweetheart, and commenced thirty years of service in the United States Army. His service included 2 tours in Vietnam and ended with Buck being the military attaché in Budapest, Hungary and then Prague, Czechoslovakia before the fall of the Iron Curtain. Buck retired as a full Colonel and worked for the Aerospace Corporation in Virginia until his retirement in 2005. Buck was a natural leader and was known as a man of principle and a true American patriot. He was a role model and trusted friend who was widely respected. In his retirement years, Buck and Trish continued their world travels and tried to keep up with their growing family. Up until a couple years ago Buck played handball at the Pentagon twice a week. Eventually the effects of intercollegiate sports, jumping out of airplanes and a very physically active life took its toll on his body and he had to very reluctantly “retire” from his handball career. Finally, his proudest legacy, his biggest pride and joy, "PopPop" left behind eleven wonderful grandchildren. Each grandchild had a unique relationship with him and he had a wonderful way of knowing everything that was going on in their lives and having conversations with each of them. No detail was too small. He celebrated their accomplishments and interests. He was compassionate when it came to their struggles and disappointments. Buck’s grandchildren knew they were loved beyond measure and will surely miss their PopPop. A celebration of life gathering will be held on 1 August 2021 from 2 - 5pm in Gainesville, VA. Interment will be at West Point in a private service at a later date. In lieu of flowers, please celebrate your health and happiness by giving your kids and grandkids a hug.

The family of Richard "Buck" Alan Buckner created this Life Tributes page to make it easy to share your memories.

Send flowers to the Buckner family.