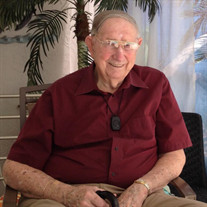 Raymond Arthur Stevenor peacefully entered into heaven’s gates in the early hours of March 29, 2021. Born at home to Arthur and Florence Stevenor in Byesville, Ohio, on a very rainy May day, Ray was the third of six children. The country doctor’s car became stuck in the mud on the way to their small farm and Arthur rode a horse to retrieve the doctor. The two men then rode double-back horseback for two miles and arrived at the house when Ray was 4 hours old. He had been delivered by his maternal grandmother. Ray completed grades 1-5 at a one room school house in Trail Run, Ohio and graduated from the only high school in the county (Cadiz High) in a class of 87 students. Following graduation, he worked as an apprentice cabinet maker at Carter Lumber Company in Akron, Ohio, and later began working at Firestone Tire and Rubber Company. In May 1943, Ray began U.S. Army Basic Training in Texas. Later assigned to an anti-aircraft battalion, he rose to the rank of Sergeant. He served throughout France, Belgium (including the Battle of the Bulge), Holland and Germany, and landed at Omaha Beach shortly after D-Day. Everyone in the 15 man unit that he led during WWII returned home safely. After the war ended, he was one of two solders selected to attend classes at the Biarritz American University in France, studying psychology, math, and art, before completing his military tour as the Permanent Sergeant of the Guard at a military institution in Germany. Discharged from the Army in March 1946, Ray returned home to Akron and his job at Firestone. He’d met Marjorie Jane Manges at church when she was 14 and he was 17 and they had a casual friendship as pen pals during WWII. Their first date was April 1, 1946 and were engaged three weeks later. Married on June 15, 1946, they shared a devoted and deeply loving marriage for over 70 years until Margie preceded Ray to heaven in 2017. They opened a shoe repair shop in 1947 while Ray continued working full-time at Firestone. Both later obtained their real estate licenses and also invented the “Free Light” camping light. Ray joined the Akron Fire Department in November 1950, and had a career that eventually led him to the position of District Chief. Upon retiring from the Akron Fire Department, Margie and Ray moved to St. Petersburg, FL in January 1978. Over the years, they enjoyed extensive travel in their trailers/RV’s, visiting all 50 states. They also took over 40 cruises as well as traveled to Canada, Mexico, Europe, and South America. Ray’s other interests included fishing, hunting, basketball, bowling and especially baseball. His faith was a very important part of his life and Ray served as both a deacon and church trustee and was the Director of the “Keenagers” Senior Group for 20 years. Ray truly had a heart for service and was very social, friendly, and engaging. He was a member of the Victory Lodge F&AM for over 50 years. In October 2017 Ray relocated to Virginia to be near his daughter. He rapidly became involved in numerous daily activities the Heritage Village Assisted Living Facility and enjoyed researching informative presentations to present to fellow residents. Ray is survived by his daughter Claudia Clontz and her husband Robert, his grandson Travis Mabry and his wife Annie, and great-granddaughters Kayla and Mia. Family services will be held at a future date in Florida where Ray wished to be buried next to Margie at Woodlawn Memory Gardens in St. Petersburg. Memorial contributions can be made to the Gary Sinise Foundation that honors defenders, veterans, first responders and their families (www.garysinisefoundation.org) or the charity of your choice.

Raymond Arthur Stevenor peacefully entered into heaven&#8217;s gates in the early hours of March 29, 2021. Born at home to Arthur and Florence Stevenor in Byesville, Ohio, on a very rainy May day, Ray was the third of six children. The country... View Obituary & Service Information

The family of Raymond Arthur Stevenor created this Life Tributes page to make it easy to share your memories.

Send flowers to the Stevenor family.