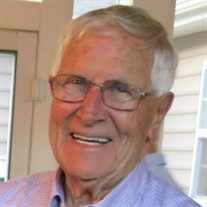 Raymond Joseph Canuel, of Catharpin, Virginia passed away May 17, 2021 of natural causes surrounded by his family and loving fiancé Patricia Bradburn. Raymond (Ray) was the son of the late Albert and Aldea Canuel of Fall River, MA and was preceded in death by his loving wife of 50 years Marlene, siblings Alphonse Canuel, Norman Canuel, Charles Canuel, and Theresa Simon. Ray is survived by his brothers Donald Canuel and Roger Canuel, his fiancé Pat Bradburn, daughter Raelene Wagoner (Doug), son Raymond J. Canuel Jr (Stacy), grandchildren Lydia, Madeline, Cole, Austin, Sophia and great grand-child Zuri. Ray was born May 10, 1929 in The Bronx of New York City, the 4th of 7 children. He would row boats for local fishermen in and around City Island for work. When Ray was twelve, he and his family moved to Fall River, MA. Partnering with his older brother Norman, he developed a fascination with cars and worked at a station developing skills to service them. Ray proudly served in the United States Army as a Sergeant in the Korean war supporting the armor forces spearheading the drive to China past the 38th parallel. Upon his return to Fall River, he befriended and joined two local men traveling to Washington, D.C for work and new opportunities. Ray fell in love with the Washington DC area. He worked as a mechanic for Logan Ford and enjoyed boating and water skiing on the Potomac river. He met his wife Marlene at Logan Ford, and they were married in 1959. They lived in Hunting Towers, before settling in a home off the GW parkway near Mount Vernon. Ray became an expert mechanic and took on the relatively new auto technologies of automatic transmissions and air conditioning. With a growing family, in 1969 Ray took his skills to work for the Federal Government as an HVAC engineer supporting GSA, the Government Printing Office, and finally the Bureau of Engraving and Printing. Ray was a tireless provider who never took sick days, never turned down an opportunity for overtime, chose weekend shifts, leveraged night shifts and worked the paid holidays, calling them “triple time” pay. He also moonlighted installing central air conditioning for local northern Virginia residents for extra money. Ray loved taking the family in a camper to various beaches up and down the east coast and to Disney World. He also relaxed watching professional football, attending countless orchestra concerts or picking crabs. By 1989, Ray and Marlene provided 100% of the education expenses needed for both their children to graduate from William & Mary and James Madison University. On Christmas Eve 1991, Ray officially retired, but with the honed skills in HVAC, electrical, carpentry, welding, plumbing, masonry, and the ability to fix anything. No project was too big for Ray to tackle for himself, a neighbor or his children. The camper was sold, and they took many cruises to include the Caribbean and Norway. After 50 years of marriage, he lost his first love of his life Marlene. He traveled up and down the east coast visiting friends, but soon found his second great love of his life Patricia (Pat) Bradburn in 2010. Ray expanded his skill set by caring for the beautiful land backing Bull Run. This included caring for horses, pond irrigation, fence maintenance, anything on his Gator, or his favorite wood chipper. More importantly, Ray gained the love and friendship of Pat’s children Trina (Craig), James (Carol), Mark (Kara), Eric, and their children and grandchildren. Ray lived life to its fullest and was active, driving his car, performing drywall, electrical, and garage door spring repairs just days before his passing. Services will be held at the Pierce Funeral Home, 9609 Center Street, Manassas, VA 20110 on Thursday, May 27th, with the Visitation at 3:00 PM and the Memorial Service at 4:00 PM. Ray will be laid to rest next to his late wife, Marlene, at Arlington National Cemetery in the future. Expressions of sympathy should take the form of donations to the Capital Caring Adler Center for Inpatient Care or the Loudoun Symphony.

Raymond Joseph Canuel, of Catharpin, Virginia passed away May 17, 2021 of natural causes surrounded by his family and loving fiancé Patricia Bradburn. Raymond (Ray) was the son of the late Albert and Aldea Canuel of Fall River, MA and was preceded... View Obituary & Service Information

The family of Raymond Joseph Canuel created this Life Tributes page to make it easy to share your memories.

Raymond Joseph Canuel, of Catharpin, Virginia passed away May...

Send flowers to the Canuel family.