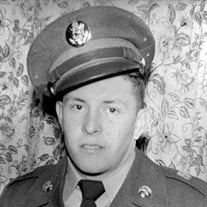 Raymond "R.T./The Hay Man" Travis Byrne Sr., age 90, of Catharpin, VA passed away on March 31, 2021 at Manassas Health and Rehab Memory Care Unit after his battle with dementia. Raymond was born on February 22, 1931 in Catharpin, VA to Travis Carter and Annie Gertrude (Ellison) Byrne. As a young boy, Raymond was born and raised on the farm located on Saunders Land with his mother, father and older brother Johnny in the farmhouse that his father purchased in the 1920s. In December 1953 he entered active duty in the Army. He was stationed in Germany as part of the C519th Field Artillery Battalion. He received the Army of Occupation Medal, the Good Conduct Medal and The National Defense Service Medal. He received an honorable discharge in 1962 as a Private 1st Class. Upon returning stateside, Raymond went on to start his own excavating company but continued working on the farm. Raymond was in the farming industry for over 50 years, with the last 30 years working alongside his son Ray Jr. where the two would bicker back and forth about the better way of baling hay, feeding cattle, fixing tractors with each thinking they knew better. But in the end they always did it, Raymond's way! For the past 35 years Raymond lived and worked on the Lone Oak Farm located on Pageland Lane with his partner Barbara Brower. Raymond is survived by his son Raymond T. Byrne Jr. and daughter-in-law Michele L. Byrne of Warrenton, VA. A graveside service will be held at Middleburg Memorial Cemetery on Monday, April 5, 2021 at 1:00 PM. A celebration of life will be held at Billy Moore's Farm, 4015 Sanders Ln. Catharpin, VA 20143 on Saturday, April 10, 2021 at 4:00 PM. In lieu of flowers, the family requests that donations be made in his name to the Alzheimer's Association. https://act.alz.org/site/Donation2?df_id=47784&mfc_pref=T&47784.donation=form1&32112.donation=&utm_source=google&utm_medium=paidsearch&utm_campaign=google_giving&set.custom.wt=giiving&gclid=Cj0KCQjwmluDBhDXARIsAFITC_6LTXTtm3CZqtPJuFm6oBZm8LVJ9gL7WSUhOcvdP6Er-qgyvaGqxl8aArd6EALw_wcB

The family of Raymond Travis Byrne Sr. created this Life Tributes page to make it easy to share your memories.

Send flowers to the Byrne family.