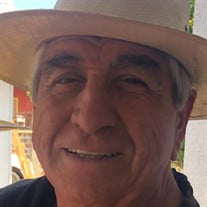 Raul Fernando Barrientos Teran resident of Mineral (Lake Anna), VA. On Friday, March 25 at 4:50 am in Spotsylvania Regional Medical Center, our family lost their hero and loving patriarch. Beloved husband of Elcira Barrientos. Father of Fernando and Gustavo Barrientos and their respective wives, Camilla Barrientos and Maria Barrientos. Stepfather to David and Marcelo Muñoz with their respective wives, Daisy Muñoz and Yasna Ramirez. Grandfather (Papi) to Raquel Barrientos, Selina Gonzalez (Salvador Gonzalez), Natalie Barrientos (Mark Richards), (Tata-ul) to Macarena Muñoz, Mattias Muñoz, David Muñoz, Sebastian Muñoz and Maximiliano Muñoz. Great grandfather to Romeo, Leila, Apollo, Lucas, Javier and Violeta He is preceded in death by his first wife, Gladys Ruth Barrientos, his father, BG. Raul Barrientos Velasco, mother, Marina Barrientos Lara, brother, Carlos Barrientos, brother in-law, German Schrupp, sisters in-law, Concepcion Sabha and Charito Ferrrufino Barrientos. Surviving siblings with spouses are Rosita Schrupp, Miguel and Miriam Barrientos, Cesar Barrientos and Ely Vargas, Rene Barrientos. Brother in-law Jorge Sabha and sister in-law Kathy Sabha. Raul Barrientos was born on May 30, 1941, in La Paz, Bolivia. He was the second of 6 siblings born to Brigadier General Raul Barrientos Velasco and Marina Teran Lara. As a young man he attended school at Instituto Americano and Colegio San Agustin in Bolivia, South America. Losing his father at the age of 8, he took on many jobs to help his mother maintain the household including being a performer of dance and music, a pharmacist’s apprentice and even an undefeated prize fighter. Growing up he learned to defend himself as well as standing up to bullies for other kids too. He learned much from the pharmacist for whom he worked; he was also preparing to join the military and become a pilot with the help of his first cousin Rene Barrientos Ortuño. Life had other plans for him, so he did not pursue that field. He continued caring for his mother and younger siblings until he was 18 years old. He spent some time in Argentina prior to marrying Gladys Ruth Sabha in November 1961. During his youth he came to know Jesus Christ and spent time in church nurturing his faith. He was able to blend his city life experience with his life on a family farm where he learned to be a ranch hand and train horses as well as becoming the village medic. In July of 1962 the couple had their first son, Fernando Jorge. A few years later, Raul traveled to the United States with his wife and son in search of a better life and to help his sister-in-law, Kathy Sabha start her family and to start working with his brother in-law, Jorge Sabha. There, he studied diligently and became a journeyman electrician, not an easy feat for the effort was wrought with challenges from the language barrier to favoritism on the job. The work itself was hard and the study was equally demanding. He never waned or complained. Soon he became a very well-respected member of the International Brotherhood of Electrical Workers Union where he came to be known for his impeccable work ethic and his skill as a site foreman of several jobs. In 1990, The Washington Building Congress awarded him the coveted Craftsman of the Year award for his part in the electrical construction of the Mobile Oil complex in Falls Church, VA. In January of 1974, the couple had their second son, Gustavo Raul. The family flourished and grew. The sons grew up learning about kindness to others, loyalty, the value of hard work and the love for family, as well as the importance of following God and His commandments. In 1975, Raul became a naturalized, proud citizen of the United States of America. Raul passed on his love of life, God, good humor, and generosity to his sons and eventually to his grandchildren and even great grandchildren. He was looked upon by his sons, nieces, and nephews as “Superman”, he could seemingly do anything! From scaling up to a third-floor balcony when someone got locked out of their apartment or making things appear magically behind one’s ear, saying to the little ones “Blow!”, and the lights would turn on, to making an entire room full of people laugh at his jokes or join him in singing songs while he played his guitar or just be entertained by his dancing to “Zorba the Greek”! He was something to watch on the soccer field too! Teaching us how to do a rainbow or make a banana kick. He was not a tall man, but he could spike a volleyball like a pro! Sadly, after losing a 7-year battle with cancer, Gladys passed away in August 1988 during which, Raul never left her side. After living through the difficult time from that life changing event, he met and married his beloved wife, Elcira Del Carmen, in 1995. To this new relationship he brought his pleasant ways and kind heart to share with her sons David and Marcelo Muñoz and their families who loved him very much. Raul continued working until 2004 when he retired and moved to Mineral VA near Lake Anna. There he enjoyed yearly winter trips to Chile and Bolivia where he reunited with family members and spread the charm for which he is so well known. Summers were spent gardening, boating, upgrading the house and even building a deck. He was an active, athletic, handsome man that loved all of his family, near and far. He will be dearly missed by those who survive him and wonderfully welcomed by those who preceded him in being with the Lord. A visitation will be held at Pierce Funeral Home Chapel 9609 Center Street, Manassas, VA 20110 from 7-9 pm on Tuesday April 5, 2022 Burial service will be held at Fairfax Memorial Park 9902 Braddock Road, Fairfax, VA 22032 on Wednesday April 6, 2022, at 10:00 am

The family of Raul Fernando Barrientos created this Life Tributes page to make it easy to share your memories.

Send flowers to the Barrientos family.