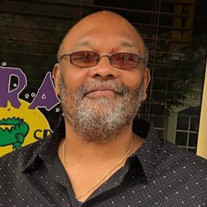 Ralph Delmore Wheeler Jr., 63, of Manassas VA, left this world to be with the Lord on Saturday, February 6, 2021. Born on Saturday, November 16, 1957, in Washington DC, he was the son of the late Ralph D. Wheeler Sr. and Thelma T. Wheeler. Ralph grew up in Washington DC, and attended Massanutten Military Academy in Woodstock Virginia. After graduating from the academy in 1975, he went on to study politics at Ferrum College. In 1978, Ralph was hired by the United States Postal Service, where he worked for 40 years as a clerk and mail handler. During his dedicated years with the United States Postal Service, he held several positions within the Postal Workers Union, which included being elected as clerk craft director and Vice President of Northern Virginia Area local 6803. Ralph also served as General President of the Virginia Postal Workers Union, as well as, serving as shop steward and branch president of local 305, representing postal employees across the state of Virginia for many years. Known to many friends and coworkers as “Big Wheel”, Ralph had a passion for the union and deeply cared about the employees he represented. Ralph possessed immeasurable patience, charm, wisdom, quick wit, and an ability to bring people together. Ralph was known for his listening and non-judgmental ear, problem solving skills, compassionate heart, infectious laugh and sense of humor, all attributes that contribute to his legacy. Ralph had a great love for his family and cherished being a devoted husband, father, son, brother, granddad, great-granddad, uncle, and friend. After his retirement from the USPS, he was blessed to share many joyful occasions, making lasting memories with his family, friends and especially his grandchildren. He especially came to love Mondays during the pandemic. That’s when “Camp Wee” was formed where he would take the grandchildren on special outings then lunch afterwards. He had a great fondness for trying new and strange foods and was pleased to learn he could rope his granddaughter Alexis into being his eating buddy. His hobbies included, listening to music, traveling, and tai chi at the senior center. He even had his sense of humor right up to the very end. Hassling Nancy that all his money better be in his wallet when he returned home from the hospital. He was grounded in his faith and love for the Lord, and prior to earning his wings, he let his family and friends know he was leaning on his faith and reminded us of Hebrews 13:6, which states, “Let your faith be bigger than your fear”. Ralph leaves to cherish his loving memory, his wife Nancy Wheeler; daughter Pam (Quinn), son Corey (Courtney), mother Thelma, sisters Beverly, Patricia and Sandra. Stepchildren Charles (Mel), and Jeff (Melissa). His 9 grandchildren, 4 great grandchildren and a host of nieces, nephews and other family and friends.

Ralph Delmore Wheeler Jr., 63, of Manassas VA, left this world to be with the Lord on Saturday, February 6, 2021. Born on Saturday, November 16, 1957, in Washington DC, he was the son of the late Ralph D. Wheeler Sr. and Thelma T. Wheeler.... View Obituary & Service Information

The family of Ralph Delmore Wheeler Jr. created this Life Tributes page to make it easy to share your memories.

Send flowers to the Wheeler family.