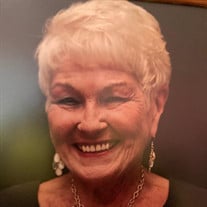 Phyllis Jean Jackson Bowling, age 87, of Bristow, Virginia, passed away Sunday, February 13, 2022. Born in Bartley, West Virginia, she was the daughter and eldest child of the late Clovis Edward Jackson and Vertie Terry Hale, and the stepdaughter of the late Clayton Dye. Phyllis retired from Battlefield Ford in Manassas after a 37-year career as a bookkeeper. In her retirement, she took up substitute teaching for the City of Manassas and spent several years spreading her special joy to tiny elementary school students. She was an active member of the Chapel Springs Assembly of God for 32 years. Volunteerism was a theme throughout her life and over the course of six-decades she served variously as a Girl Scout Troop leader, a community resettlement educator during the 1975 Vietnamese refugee crisis, a docent at the Manassas Museum, a Pink Lady with the Prince William Hospital Auxiliary, and a Volunteer Reader for Prince William County Public Schools. She also volunteered with the Prince William County Public Library System, the Prince William County Gypsy Moth and Mosquito Control Branch, the George Mason University Environmental Science Department, and the Chapel Springs Food Pantry. One of her most significant volunteer commitments was serving as a full academic-year host to a high school foreign exchange student from Albania, thus serving not only as a cultural ambassador but also a surrogate parent for a 16-year-old far from home. She was an avid reader and Scrabble player. Many family members have fond memories of times spent at the Scrabble board with her. She loved to travel, taking numerous trips with her family and her church and had visited 32 countries across Europe, the Middle East, and North America, as well as travelling extensively throughout the United States. While she spoke no language other than English, she was fluent in the universal language of friendliness and interacted pleasantly with everyone she met on her travels. She loved to act and had been a thespian in high school. She returned to acting in her retirement and found great joy playing the roles she secured in several productions of the Vpstart Crow company in Manassas and many productions of the Dunbarton Players in Bristow. With the right resources, training, and opportunities earlier in life she would have been a star! Phyllis was a gregarious person and made everyone she met feel special, largely by giving freely of her love and showing so much interest in everyone around her. She was a wonderful mother, an extraordinary grandmother, an awesome great-grandmother, a beloved sister, and a cherished friend. She is survived by her daughter Kim (James) and son Todd (Shirley); her granddaughter Hannah (Glen); great-granddaughters Vale and Eira; siblings Evelyn, Barbara (Rolly), Claude (Judy), Sandra (Ron), and Clayton (Carol); brother-in-law Johnnie (Brenda); eight nieces and six nephews; and seven great-nieces and six great-nephews. She was preceded in death by her ex-husband Bill, sister Wanda, and brothers-in-law Dale and Bill. A graveside service will be held Monday, February 21, 2022, at 12:00 pm, at Stonewall Memory Gardens, Manassas, Virginia. A celebration of life will be held later in the spring. Those wishing to bring and leave at the graveside individual flowers or hand-held bouquets may do so, glass vases are not permitted by Stonewall Memory Gardens; Individuals who order flowers should confirm with the florist that the arrangements will not arrive in glass vases. Those wishing to honor her memory may do so with a gift to the American Heart Association or the American Cancer Society.

The family of Phyllis Jean Jackson Bowling created this Life Tributes page to make it easy to share your memories.

Send flowers to the Bowling family.