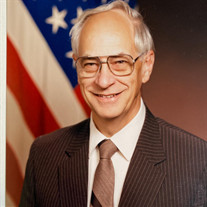 Philip Edward “Phil” Louer, Sr., age 97, husband, father, grandfather, and beloved friend, passed away on Sunday, July 25, 2021, at Haymarket Medical Center. A funeral service will be held on Wednesday, August 4 at 12:30 pm at Grace Church of Gainesville officiated by Pastor Rod Fultz, followed by entombment at Stonewall Memory Gardens in Manassas, VA at 2:00 pm. A celebration of Phil’s life will be held at Grace Church of Gainesville afterwards. All are welcome to attend. Phil was born in New Castle (Lawrence County), Pennsylvania, in 1923. He joined the US Army and in 1942 he fought with the 78th Infantry Division in the Battle of the Bulge. An interview with Phil about his time in service to our country can be found online in the Library of Congress – Military Operations Research Society (MORS) Oral History Project. After his military tour he graduated from Yale University in 1948 with a degree in electrical engineering. Later he became the Deputy Director of the US Army Concepts Analysis Agency (CAA) that was later renamed the Center for Army Analysis. He retired from CAA in 1992. Phil was inducted into the US Army Operations Research and Systems Analysis (ORSA) Hall of Fame in 2012. Phil’s interests included gardening, music, singing, reading, Bible study, and social activities. He and his late wife, Frances, cultivated an extensive collection of azaleas on their property and were members of the Azalea Society of America and the American Rhododendron Society. They were also longtime members of the music program of Clarendon United Methodist Church in Arlington, VA. Later they were members of Grace United Methodist Church where they played in the handbell choir, the Chancel choir and the Chimers. They also enjoyed singing in the Manassas Chorale. Most recently, Phil was part of Grace Church of Gainesville. He is preceded in death by his parents, John William and Mildred (Welch) Louer (both of New Castle, PA); his wife, Frances; also by his sister, Ellen Sophronia Hopper, of Mount Jackson, PA; his sister, Elizabeth Burton of Pittsburgh, PA; brother John (Jack) Louer of Sanford, North Carolina and lastly, his younger sister Joanne Mansfield, of Hurst, Texas. He is survived by his son, Philip Edward “Dutchie” Louer, Jr. and wife Anne Elise Thomas; their two daughters, Ayla and Mona Louer of Bedford, VA; grandson, Sequoyah Healy-Louer of Denver, CO; niece Karen Richmond, of Purcellville, VA and nephew Bruce Mansfield of Hurst, Texas. Phil was dearly loved and will be greatly missed by family and friends alike. In lieu of flowers, donations may be made to Grace Church of Gainesville or Grace United Methodist Church of Manassas.

The family of Philip Edward Louer sr. created this Life Tributes page to make it easy to share your memories.

Send flowers to the Louer family.